A smaller carbon footprint? There's an app for that | News | Mountain View Online |

A smaller carbon footprint? There's an app for that 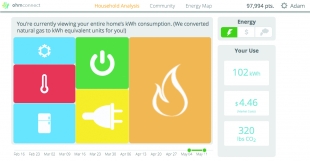 Details of home energy use are part of the Ohmconnect app to sell energy savings back to the energy market.

Free Nest so you can get even more advertisements:
Web Link
(Google just annouced that they will someday serve ads to Nest thermostats)

I think it's pretty clear that the only way to reduce our carbon footprint is through market mechanisms. Good to see a Bay Area startup doing this!

Also, you may not need air conditioning if you live in a single-family home in Mountain View. With double-glazed windows, insulation in the walls, and an insulated roof, my house never goes above 80 degrees when it's 100 outside. The key is to keep windows and doors closed during the day, and open them in the evening to catch the cool breeze. The insulation will save you money on heating in the winter too.

What Local Teens are Saying
By Sherry Listgarten | 19 comments | 2,628 views