Slated for retail or restaurant use, developer seeks to use ground-floor space as employee break room 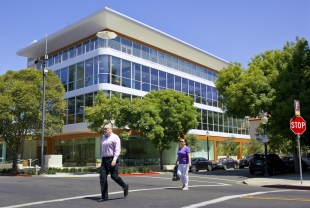 People cross the intersection of Villa and Bryant Streets, with the new WhatsApp building in the background, June 3, 2014. Michelle Le


This is a building project with a history. It was "sold" to City Council and the public in 2012-2013 -- with considerable support at the time from local residents -- on a basis that emphasized a ground-floor cafe or other public retail use. (Not that the developer would solicit some coffee-house chains and abandon the public use if those didn't respond.) The developer received various planning concessions in exchange for this public benefit.

The number of new "cafe/restaurant/retail" tenants arriving downtown since Council approved this project last year is unprecedented in the 20 years I've followed local retail, even though none of them was a chain coffee house. There's no shortage of interest in downtown MV by commercial tenants within the approved charter for the building's ground-floor corner frontage (a block off Castro, diagonally opposite Steins Beer Garden, and across the street from a major public parking garage). A public business on that corner would support the downtown's vibrancy; a glassed-in office break room there would be bizarre.

I'm seeing a groundswell of public interest (beyond what was evident at the June-25 zoning hearing). At that hearing, developer Burnell remarked that he doesn't go back on his word. I believe the citzenry is only asking him to deliver as promised.

Looks like WhatsApp is trying to transform Downtown from a public-friendly space to a closed-in corporate campus. If WhatsApp wants that type of building - they should move away from downtown. Ground floor retail is the reason why our downtown flourishes.

Report Objectionable Content
Email Town Square Moderator
3 people like this
Posted by Garrett
a resident of another community
on Jun 28, 2014 at 3:09 pm

Maybe the space was to high, or just not interesting enough. I drive for a living so I see empty retail spaces that do get filled up. Why not allow break room for now, who knows when things settle down, WhatApps might give up the space.

Seen industrial units become retail, housing turned into retail and so forth.

Report Objectionable Content
Email Town Square Moderator
3 people like this
Posted by Amelia
a resident of Old Mountain View
on Jun 30, 2014 at 7:35 am

A Specialties Cafe would be great in this spot...

Report Objectionable Content
Email Town Square Moderator
3 people like this
Posted by Guest
a resident of Whisman Station
on Jun 30, 2014 at 9:09 am

How many parking spaces does this building have? As far as I know, not less than 400 will work there, where they are going to park?

Report Objectionable Content
Email Town Square Moderator
3 people like this
Posted by Trey Parker
a resident of Monta Loma
on Jun 30, 2014 at 11:13 am

The problem is that there's not enough parking? Then why did the city allow the developer to not meet the minimum parking requirements for this site?

Report Objectionable Content
Email Town Square Moderator
5 people like this
Posted by Steven Nelson
a resident of Cuesta Park
on Jul 3, 2014 at 9:30 am

Dear Max, thanks for your 'care taking' of downtown. Great job on realistic, fact based discussion. "Public Benefit" is a very interesting concept and is one of the 'trades' that communities do with developers. It is a dance. Both partners want a 'win' in the competition. But one has to lead - or toes get stepped on.
The city takes the lead and the developers follow. Hopefully, like San Antonio Phase II, the developer who has learned the steps better (public spaces - thanks Ronit) doesn't get stuck with a 'change of dance'.
If this developer doesn't like the dance step we have called - sell out - and let another parter for our city step in. It is clear to me that the city code on this type of conversion itself needs change!
This is a free country - again -the developer is FREE TO SELL - if our terms are too onerous.

Note: "hat "parking in-lieu fees" must be paid if the space is not occupied by commercial, retail or restaurant use." How much is these fees? Either they are small or whatsapp is more than willing to pay for it and the rent on top. Else it would seem that he could easily coax one or many if too big for one, two organizations to run a cafe and something else together, maybe a non-profit like red rock. The in-lieu fees could be a subsidy for such a business. This suggest strongly that the developer had no intention of renting to a cafe/etc. because whatsapp doesn't want it.

If they put a Phils coffee in that is exclusive to whatsapp like the one inside facebook headquarters I would be quite upset, for then no phils would ever open in mv to the public while it is there. Think of what chain or restaurant you would be upset seeing go in that you would not be allowed to be a customer at. Could someday there will be separate doors and restrooms in public buildings and other retail establishments for large corporate techies and regular mv residents?

Report Objectionable Content
Email Town Square Moderator
3 people like this
Posted by Steve A.
a resident of Rengstorff Park
on Jul 13, 2014 at 2:45 pm

Agree with Max Hauser above. A cafe would better suit the city. I'm sure there are many who owners would love to be on the ground floor of a large commercial building. We should also provide adequate parking in the downtown area. The developers need to stick by the deal. An employee lounge on the ground floor seems like a bad idea.