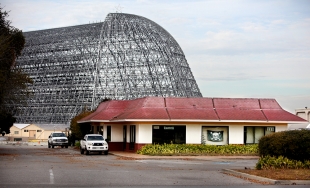 The team that lead the effort to reconnect with the ISEE-3 satellite take shop at the closed down McDonald's located in Moffett Field. Photo by Michelle Le

The scrappy bunch of students, entrepreneurs and former NASA scientists who work out of "McMoon's" -- an abandoned McDonald's at Moffett Field -- are at it again. They're using crowdfunding to take control of an abandoned 1978 NASA satellite to study the weather on the sun, potentially predicting impacts on earth from climate change and dangerous solar storms.

It's not the first time the group in the shuttered McDonald's has won public interest in a project. A few years ago the group made headlines for its efforts to digitize reams of film of high-resolution images of the moon taken during the Apollo missions in the 1960s.

Now the group's found that the International Sun-Earth Explorer-3, launched during the disco era, is still useful for gathering data in space, especially from the sun. It was launched in 1978 to study solar winds, magnetic fields and look for gamma-ray bursts, said Dennis Wingo, who is helping to lead the effort at Moffett as CEO of Skycorp Inc.

"I don't think anyone imagined that 36 years later we'd still be talking to it," Wingo said.

Scientists can thank what is apparently a very reliable set of solar panels that always face the sun, and the satellite's 5-watt radio, which is enough power to communicate back to earth, now 2 million kilometers away. The satellite is so old it doesn't even have a computer on board. Its battery died in 1981. Fortunately for science, most of its 13 sensors still function.

The group funded the effort with $160,000 raised through online crowd-funding -- an outpouring of public support helped surpass a $125,000 goal. NASA approved the use of the satellite by the citizen scientists under a so-called Space Act Agreement.

In the early 1980s, the satellite was taken out of its original orbit and through a set of complex maneuvers, put on a trajectory to be the first spacecraft to fly though the tail of a comet: the Giacobini-Zinner comet, which it encountered in 1985, not long before it also recorded an encounter with Halley's comet.

Earlier this month the team attempted to take advantage of a chance to change the trajectory of the satellite to put it back into its original orbit between the sun and the earth on what is called the L1 Lagrangian point, where the gravity of the earth and the sun cancel out.

"If we don't do this, we'll never be able to, and it will be a dead satellite," Wingo said as the team got ready for the big moment in a video posted on the project's website, spacecraftforall.com, that was created with help from Google.

In the end, the propulsion system failed -- the satellite's nitrogen tanks had emptied, and a mood of disappointment and depression set it, Wingo says. But while the team's hopes for longer term contact were dashed, the satellite will still be in range to collect data from the sun for another year.

The team says that establishing contact with the satellite was a remarkable achievement in itself, requiring a lot of detective work. "It was like dumpster diving for science, looking up hints from 10, 20, 30 years ago," said Keith Cowing, co-lead for the project, in the video.

"Studying the sun is incredibly important," said Wingo, noting that geomagnetic solar storms "could fry our entire electrical civilization." In 2012 it was reported that a massive solar flare on the sun would have hit earth's magnetosphere if it had happened nine days earlier, causing extensive damage to electric systems from which it would take years to recover. In 1859 a solar storm did strike earth in what is known as the Carrington event, a geomagnetic solar storm that caused telegraph systems to fail, sent shocks to telegraph operators and allowed people to see auroras from as far south as the Caribbean. Wingo said the satellite will fill a data gap to help predict such a solar storm, which has a 12 percent chance of happening by 2022.

The team is now working to use Stanford's satellite dish, the iconic structure that's seen from Highway 280 in Palo Alto and operated by SRI International, to provide better communication with the satellite. The aging satellite requires stations around the world to provide constant contact with it, and so far there are three such stations, including the Aracibo observatory in Puerto Rico. The group hopes to set up another in Japan to have communication with the satellite 24 hours a day.

The clock is ticking to gather data because the earth and the satellite (which is also orbiting the sun but at a different speed) are speeding away from each other at 250,000 kilometers a day. In a year the historic satellite will again be lost -- until it meets Earth again in 15 years and scientists can once again resume contact.

Maher is a registered user.


I love this story. Good on them for their perseverance and curiosity. It makes my heart happy that some people care so much for our precious planet to use their skills to pursue these studies.

I wish I had the cash flow to help support their efforts. I certainly would.

4 people like this
Posted by Lorenzo Burti
a resident of another community
on Sep 9, 2014 at 2:18 pm

Return to the future!

These local restaurants are donating meals to Bay Area residents in need. Here's how to help.
By Elena Kadvany | 6 comments | 10,651 views

Coronavirus: Plan ahead now for a big outbreak
By Diana Diamond | 17 comments | 3,729 views

Will the Coronavirus Save Lives?
By Sherry Listgarten | 27 comments | 3,591 views

The first few seconds after awakening; before I remember the virus
By Chandrama Anderson | 0 comments | 630 views