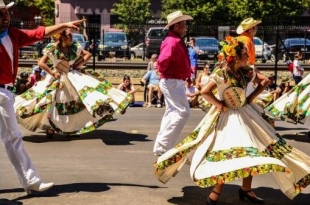 Staying in town for the Fourth of July? We've got plenty of local options for celebrating America's birthday (and Canada's, too).

Shoreline Amphitheatre's annual fireworks display and San Francisco Symphony performance (1 Amphitheatre Parkway) will start at 8 p.m. on July 4. Mountain View residents who didn't score the discounted tickets can always picnic at Shoreline Park with a good view of the pyrotechnics. For those who did get the coveted tickets, an additional $10 parking fee will be collected the night of the event.

Bike parking and extended trail hours will be available for those walking to and from the event, which is the best way to avoid the annual traffic jam that follows.

Spectators can also watch the Shoreline fireworks from a pedal boat, rowboat, canoe, or kayak, available at the Boathouse & American Bistro at Shoreline Lake (3160 N Shoreline Blvd.). Park-goers have the option to purchase picnic basket and watercraft combos and $15-per-person day passes. Go to Boathouse and Mountain View.

At Palo Alto's 36th annual Chili Cookoff in Mitchell Park (600 E. Meadow Drive), teams will compete to win more than $2,000 in cash and prizes. Among the competitors at this year's Chili Cookoff include veteran winners "Lounge Lizard Chili" and the Klemens Family. Also returning this year are "El Viaje Misterioso" and "Good King Wench and Lass." New competitors include "Chili is My Favorite Flavor" and "Smoky Bowls." Those who wish to taste instead of cook can do so for $5. The rest of the festival (July 4, noon to 5 p.m.) includes food booths with offerings ranging from Oaxacan tamales to chowder; live music from Radio City All-Stars Band; and free childrens' activities. Go to Chili Cookoff.

Los Altos' traditional Glorious Fourth celebration includes a free concert in Shoup Park (400 University Ave.) featuring Ye Olde Towne Band and The Unicorns. The event will run from 10:30 a.m. to 2 p.m. and, in addition to the concert, there will be a picnic lunch for sale, along with balloon art and speeches from local officials. Go to Los Altos.

Break out the red, white and blue and decorate scooters, skateboards and bikes for the annual Los Altos Hills parade. Parade participants will meet at 9:30 a.m. at Town Hall, 26379 W. Fremont Road, and will be marching down Fremont Road to Gardner Bullis School at 10 a.m. Paraders will be served lemonade, watermelon and coffee at the destination.

Menlo Park's annual Fourth of July Parade & Celebration returns with a slew of activities. The bike-trike-and-wagon parade down Santa Cruz Avenue begins at 11:45 a.m, ending at Burgess Park (701 Laurel St.), where attendees can grab a bite to eat from a variety of vendors and listen to music from Pop Fiction. Kids can try inflatable jump houses and giant slides, outdoor bubble play, games, crafts, face painting, rock walls, carnival games and more. The event is free, but some activities may require a wristband that can be purchased for $7. Go to Menlo Park.

Redwood City will also be home to the 79th Fourth of July Parade, which begins at 10 a.m. This year's parade is a celebration of Redwood City's 150 years, 1867-2017, honoring its history, diversity and neighborhoods.

After the parade comes an Independence Day Festival from 9 a.m. to 5 p.m. in Courthouse Square, featuring a battle between the Stanford University and University of California at Davis marching bands at 1 p.m.; vendors; food, and a fun zone for kids. Meanwhile, the annual 4th of July carnival, coordinated by the Woodside Terrace Kiwanis Club, will be in the parking lot at Veterans Boulevard and Winslow Street (from noon to 10 p.m.).

Courthouse Square will also host the "Chalk Full of Fun" chalk-art festival (from 8 a.m. to 4 p.m.) and the San Mateo County History Museum will offer half-price admission and a day of old-time activities such as vintage-film viewing, hand-cranked ice-cream making, traditional crafts and more.

The Port of Redwood City will once again host food trucks, live music starting at 7 p.m. (from The Tribal Blues Band) and a fireworks show at 9:30 p.m.

The U.S. isn't the only North American nation celebrating an anniversary. On July 1, Stanford Live will mark Canada's 150th birthday with a musical celebration starting at 4 p.m. (in and around Bing Concert Hall, 327 Lasuen St.). The concert will feature Jenn Grant, David Myles, Wendy Maclsaac and Troy MacGillivray, Còig, the St. Lawrence String Quartet and more. Tickets are $15-$30. There will also be Canadian-inspired food, such as Montreal meat sandwiches, maple candies, drinks and more, available for purchase. Go to Stanford Live.

For a very western Fourth, head to the Junior Rodeo in Woodside, where young cowboys and cowgirls will be showing off their skills. A long-standing tradition put on by the Mounted Patrol of San Mateo County, the event features roping, barrel racing and bull riding. The old-time fun starts at 10 a.m. Adults (18 and over) are $15, Children (6 to 17) are $10, and kids under 6 years of age are free. There will be concessions for both food and beverages.

These local restaurants are donating meals to Bay Area residents in need. Here's how to help.
By Elena Kadvany | 6 comments | 10,655 views

Coronavirus: Plan ahead now for a big outbreak
By Diana Diamond | 17 comments | 3,735 views

Will the Coronavirus Save Lives?
By Sherry Listgarten | 27 comments | 3,600 views

The first few seconds after awakening; before I remember the virus
By Chandrama Anderson | 0 comments | 643 views