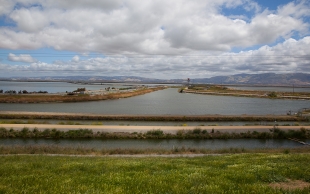 The South San Francisco Bay Shoreline Project is slated to begin next summer and will be completed in about 20 years. Engineers will create coastal levees, pedestrian bridges, tidal marsh habitat and more infrastructure to protect the South Bay from a coastal flood in the next 100 years.

Feinstein said the project was possible because of a private-public partnership, after the Cargill company donated over 40,000 acres of salt ponds and sold additional space to the federal government in 2003.

"When you see those salt ponds turned to wetlands, and when you see an osprey flying over, or this huge osprey nest ... it says we're on our way back," she said. "That's what we need more of."

Federal disaster supplemental funding will provide upfront backing for the project. The state and Santa Clara Valley Water District will then reimburse more than half of the funds.

Voters in all nine Bay Area counties approved a $12 parcel tax in 2016 that will provide local funds for the project through 2037, protecting Sunnyvale, Mountain View, San Jose, Palo Alto and Alviso.

The project includes improvements to walking trails at the refuge, observation platforms, pond breaching and restoration.

The U.S. Army Corps of Engineers, the state Coastal Conservancy and the Santa Clara Valley Water District will oversee the project, in addition to several other agencies.

I was on the fence about the parcel tax in 2016. Now that the wetland habitat restoration is happening, I am happy that I voted yes. It is my small way of giving back to my community.

Yay!! So happy to hear about this restoration work, restoring this area will go a long way toward improving our resilience to climate change.

Glad to hear this. I took my Ecology students from Santa Clara University on a series of field trips to Don Edwards National Wildlife Refuge this past fall. It's a beautiful place but could certainly use some capital improvements. One sad fact to know is that, due to excessive groundwater pumping and land subsidence, Alviso and nearby cities have sunk so much that the natural Bay can no longer be allowed to adjoin the land. The whole area would flood and cause billions of dollars of damage. Instead, we are stuck with using a series of levees (dams) basically forever.

And with climate change continuing practically unabated due to our short-sightedness, the levees will have to be built higher and higher. It's not a good situation, but I'm glad that we have enough money to deal with it. This is why there's such a stark contrast between expected climate change impacts in developed vs. developing countries: Rich communities spend millions of dollars on seawalls; poor communities just have to retreat, and/or clean up the resulting mess.

A Pragmatic Approach to A Trillion Trees
By Sherry Listgarten | 2 comments | 3,582 views

The University of California’s flexible policies during COVID-19
By John Raftrey and Lori McCormick | 6 comments | 2,443 views

Repairing a Disagreement with your Beloved & “Physical” vs. “Social” Distancing
By Chandrama Anderson | 1 comment | 2,332 views

Get fact-based reporting on the COVID-19 crisis sent to your inbox daily.