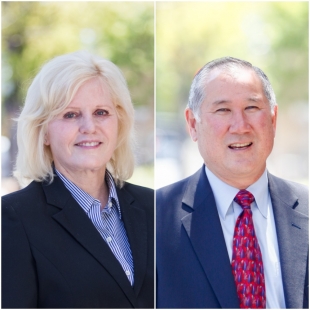 I am voting for John Hirokawa.

Laurie Smith is always there to do political favors to the elites, she has been in long enough, time to go.

A paloaltoonline reader named Jennell posted a comment on this issue which bears reposting:
“How exactly is Laurie Smith finally on the right track with jail reforms? Where is the independent oversight? How many of the blue ribbon commision recommendations have actually been implemented? Who is verifying and checking for progress? In regards to John's comments regarding the texting ring, like it or not, due process is important. In no interview or forum have I ever heard John say that he condoned the texts. He has repeatedly talked about how vile and disgusting they were. His comments about due process and evaluation of severity of discipline were in the context of comparing this disciplinary action to others in the department. If discipline was consistent and similar misdeeds likely not swept under the carpet by the current administration, there would be no need to ask how the disciplines compare. Instead there would be a history of a fair and just process for ALL misconduct. The culture in any organization starts from the top and permeates down. There is plenty of evidence that points to the toxic culture Laurie has helped create. This newspaper may be basing their endorsement on optimism for change, but my vote is with the candidate who has a clear plan for change, a huge component being independent oversight.”

So that clears that up! is a registered user.


Well, the challenger did get his candidate statement into the Voter Information Guide. The only way the incumbent could lose is for former Judge LaDoris Cordell to come out for the challenger. And people are already voting! Has Judge Cordell endorsed challenger John Hirokawa?

Report Objectionable Content
Email Town Square Moderator
7 people like this
Posted by Waverly Res
a resident of Waverly Park
on Oct 24, 2018 at 2:11 pm

Waverly Res is a registered user.


We voted for John Hirokawa. Despite his shortcomings, Smith clearly has shown that she is not fit to be SC Sheriff. BTW, why do problems with incompetence and corruption seem to happen mostly with Sheriff's Departments and not with Police Departments??? Could it be because Sheriffs are elected politicians and not independent law enforcement professionals?

Report Objectionable Content
Email Town Square Moderator
3 people like this
Posted by So that clears that up!
a resident of Sylvan Park
on Oct 24, 2018 at 2:48 pm

So that clears that up! is a registered user.


I see Judge LaDoris Cordell atop John Hirokawa's endorsers on his campaign website. But the MV Voice also is still listed as endorsing him. Has Judge Cordell changed her recommendation?

Report Objectionable Content
Email Town Square Moderator
15 people like this
Posted by Weak Endorsement
a resident of Waverly Park
on Oct 24, 2018 at 3:49 pm

Twenty years of drama and trouble in the force and the jails. Its time for change and let's give an experienced and poised candidate the opportunity to make appropriate changes that have not been implemented. John Hirokawa can make this happen.All you have on this law enforcement professional is a flub on his filing papers? He's not the career politician that Laurie Smith is. Let's send Laurie off to her generous retirement with a hearty "Thank you for your service, er, sort of". I have already voted for John Hirokawa and wish him the best in solving the problems that Laurie Smith and her cronies have ignored.

Portland's Thai food darling Pok Pok will be popping up on the Peninsula this spring
By Elena Kadvany | 2 comments | 3,641 views

Flying: How to lower your impact
By Sherry Listgarten | 18 comments | 2,952 views

My angst about the disaster of these two debates
By Diana Diamond | 18 comments | 1,025 views