Pressure over college admissions 'out of control' 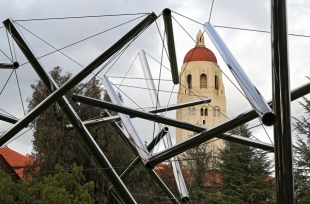 Stanford University is one of several universities across the country affected by a college admissions bribery scam that has resulted in charges for 50 people, including parents, college athletic staff and exam administrators. Weekly file photo.


There is a very good student portrait, in an article by Los Altos Town Crier education reporter Adanya Lusting, concerning the INSANE WORK LOAD that the MV-LA high school district allows its students to take.

5+ hours of homework 5 days a week. To boost your chances of "an elite" college acceptance letter. More than 25 hours a week of homework (5 AP classes).

Student Yalda Khodadad's story (she is a senior at Los Altos High School) is a must to read, if you worry about "too much, way too much" community, peer, and parent pressure on local 'good students'. MV-LA Board Policy - no AP limits.

S. Nelson is a retired Trustee of the MVWSD (K-8)

No one is forcing Yalda Khodadad to take that many AP classes. The district doesn't recommend it. You are saying they should prohibit kids from taking more than a certain number? Just what is that magic number? Taking three might be a total breeze for Yalda, but much too much for John. So where do you draw the line?

One thing I like about the district is that they allow for a LOT of choice. Want to take an AP class? Go ahead, there are no restrictions. No one is telling minorities not to take these classes.

So some students make bad decisions. Better for them to do so in high school than in college. Some do so based on parental pressure. That's a shame but really hard to fix...

Report Objectionable Content
Email Town Square Moderator
14 people like this
Posted by Look locally for the Stressed Outs
a resident of Another Mountain View Neighborhood
on Mar 15, 2019 at 2:28 pm

I know some perpetually stressed out and miserable "Great School" grads. They are living and working right next to the kids of days gone by, now adults who took a less stressful path in school. Basically ending up in the same place as them in the end.
I truly think the less pressured kids turn out to be the most balanced adults. Depending on the individual, there is no best school, only more expensive ones.

My Stanford grad coworker hears me tell stories about the slacker days in my youth and has said more than once "Ya know, I wish I would have done that"
I've got fantastic memories of a fun and mostly free-wheeling youth and he gets to tell people that he went to Stanford. Given the choice I'll take the former.

Report Objectionable Content
Email Town Square Moderator
6 people like this
Posted by vkmo
a resident of Cuesta Park
on Mar 16, 2019 at 9:25 pm

Now we know that some of the major college staff corruptly accepts bribes to admit students with lower grades. But it is really hard for these students to succeed in tough courses of these institutions, and college grades do matter. There doesn't seem to be corruption in assigning grades. Students with lower educational standards will not be able to slide into and succeed in tough courses of these important colleges. And even in easier courses, their performance will be below standard.

Report Objectionable Content
Email Town Square Moderator
3 people like this
Posted by Neighbor
a resident of another community
on Mar 17, 2019 at 8:51 pm

@vkmo
What may happen is what the Walmart heiress did: she paid her roommate about 60k for 3 years of doing her schoolwork. At USC, I believe. I think the roommate tired of this and exposed it and is writing a book about it. I think the Walmart heiress bribed her way in with a big money donation to the school.
There are easy classes at Harvard. Articles about this periodically -

Report Objectionable Content
Email Town Square Moderator
1 person likes this
Posted by Neighbor
a resident of another community
on Mar 17, 2019 at 8:52 pm


It might be good for MV-LA high school district to research their own student outcomes. 4-year college entrance. They have the #AP classes for each student, over the last 5 years. They have the Much More Important AP Test result #, 1-5. For most colleges, of higher entrance difficulty, only a 5 matters for advanced placement. (and that, as at Stanford, only in Math, and at Harvard next year, in nothing!)

The Board of the HS District can set the Public Policy to restrict AP class load (I'd say 3/year, based on my own MVHS-Stanford grad / Economics, departmental honors and academic distinction). HS students can enroll in more college courses at Foothill.

Too many AP classes - deny regular courses! That was the situation over at Los Altos HS a few years ago (think it was fixed - for Physics). AND at jr. hi (Los Altos) the problem's grown downward - no regular math track next year, even against the express input, the unanimous professional advice of the math teaching staff!
Web Link

Report Objectionable Content
Email Town Square Moderator
3 people like this
Posted by mom
a resident of Waverly Park
on Mar 18, 2019 at 2:53 pm

Nobody is telling kids to load up on AP classes, but it is common. Kids vary greatly in their ability to handle the load. The thing to remember about AP courses is that colleges are not obligated to give AP credit and may want students to take their version of the same course.

The biggest problems that I saw as a MVHS parent were:

1. There are regular classes and AP classes and not much in between. Lots of kids don't want to be in "regular" classes with kids who don't care about school. Maybe there should be more honors classes for kids who want a more academic class but not college-level work.

2. High school, especially in the Bay Area, is ALL about college prep. IMO it was a huge mistake to do away with classes like wood shop, auto mechanics, home ec, and other non-academic classes. It seems kids are made to feel that college is the only route to success. Now we have this concept of "adulting" for kids who think cooking dinner and sewing on a button is an achievement. LAHS has an auto repair and culinary arts program that I suppose MVHS kids could access if they want to drive over there. Freestyle is a step in the right direction of more choice for different learning styles and interests.

We got sucked in to the "college coach" thing because it sounded like college apps are a whole different game from when we were that age. We paid a couple thousand to a "coach" who told our child that everything about his essay needed to be changed, and encouraged him to apply to East Coast schools. Our kids ended up at in-state schools that they wanted to attend and had good programs in their major, and they received excellent educations.

I feel so bad for the kids whose parents got caught up in this scam. Can you imagine how that must feel, to know that your own parents think you're not good enough that they had to pay someone to cheat on your SAT exam and get accepted?! My children would never speak to me again if I'd done that.