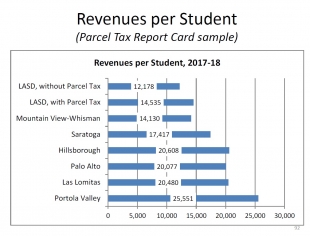 Just think of all that money that the unions steal for all the staff, that would be more than enough for this district as well as other school districts.

5 people like this
Posted by @hmm
a resident of Another Mountain View Neighborhood
on Apr 5, 2019 at 4:18 pm

Can't help yourself, can you?

Ever thought that they may be more going on here other than the unions you so like to bash?

Or is your brain wired to put out nonsense 24/7?

Kevin, nice piece... I don't say that often with the Voice.

Anyone know how donations fit into this? Los Altos raises in the range of 5x what MVWSD targets, if I am correctly reading those billboards in front of schools.

I should have been more articulate with my question. The $14,535 doesn't include the LAEF donations, correct? That would make it go up another $1k or so, right?


Report Objectionable Content
Email Town Square Moderator
10 people like this
Posted by Christopher Chiang
a resident of North Bayshore
on Apr 5, 2019 at 11:07 pm


The article points out that both MVWSD and LASD's budgets are around $14,500+/per pupil.
The article leaves out that MVLA, the high school district's budget is $21,900+/per pupil: Web Link MVLA's starting salaries are $20k above starting salaries at MVWSD and LASD, and then to $40k gap for seasoned teachers, yet K-8 educators work just as hard, have the same expenses to live, are just as qualified, and serve the same families and students.

The only way to truly stabilize funding, pay teachers more, and most importantly, streamline support systems for students would be a K-12 unified school district combining Mountain View and Los Altos, similar to PAUSD.

Past grand jury report found that near $10 million would be saved in MV/Los Altos by unifying the districts: Web Link

District offices don't support it because it would mean some district administrators and board trustees would lose their positions, but voters should take the grand jury report as a serious proposition.

Report Objectionable Content
Email Town Square Moderator
89 people like this
Posted by @follow the money
a resident of Another Mountain View Neighborhood
on Apr 6, 2019 at 7:32 am

Wow, looks like the school employees are making bank!!! And i thought i was doing good with my 80k tech job. I'm in the wrong job, are the schools hiring for a janitor position? any position? I want some of that bank roll. And they always strike for more money? And they are complaining about rent around here, that they need special house built just for them. OH MY.

Any other business would have been bankrupt by now.

Report Objectionable Content
Email Town Square Moderator
1 person likes this
Posted by SRB
a resident of St. Francis Acres
on Apr 6, 2019 at 8:28 am

The districts' responses to the Grand Jury stated that the administrative savings from a merger would be dwarfed by extra costs of merging the salary schedules (elementary teachers would have to be moved to HS teachers schedules). Unless that has changed, a merger is a bad financial move.
The Grand Jury report also didn't look at impact on school revenue, given how complex school funding is (especially for basic aid districts), it's not clear that funding for a unified district would be the sum of the 3 districts revenue. I certainly wouldn't support a merger if it resulted in less overall funding for our kids.

Report Objectionable Content
Email Town Square Moderator
3 people like this
Posted by Christopher Chiang
a resident of North Bayshore
on Apr 6, 2019 at 9:07 am


@SRB. Raising the salaries of the K-8 teachers by reducing overlapping administration would be a very wonderful thing.
Children would benefit better retention of talented K-8 teachers. Logistically, a unified district here would have tiered salary schedules that would take years to sync, but Palo Alto pays elementary and high school teachers the same, worth MV and Los Altos exploring this same long term goal.

Report Objectionable Content
Email Town Square Moderator
2 people like this
Posted by SRB
a resident of St. Francis Acres
on Apr 6, 2019 at 9:57 am

I'm not disputing the benefits but there are serious financial issues to consider:

Raising K-8 salaries to HS levels would cost twice the putative administration savings (see answers from school districts to Grand Jury repor
We don't know that the revenue for a Unified District will be the sum of the parts (as a former trustee, I'm sure you realize how complex school funding formulae are).
Merging the 3 districts will require a lot of accounting time and dollars to reconcile bond obligations, parcel taxes...

Report Objectionable Content
Email Town Square Moderator
5 people like this
Posted by Factors
a resident of another community
on Apr 6, 2019 at 3:11 pm

The data is out on property tax collections for 2018-19. LASD's base increased 7.7% while MVWSD's only went up by 4.3%. So the trend isn't present for this current year.

A big factor in not having enough funds to give raises in LASD is having more teachers per student. LASD is at about 16.8 students per teacher this year, whereas MVWSD is closer to 20. So, the LASD teachers could have a 20% raise if their number was reduced to only have 1 teacher per 20 students. My understanding is that LASD historically had a ratio of about 1 teacher per 19 students and there is an intention to get back closer to this in the future, which will allow more teacher raises.

Another factor is that MVWSD has 34% low income students who need special help and are more expensive to educate. LASD has only 5% low income students. Both districts have a lot of local funding beyond property taxes, mainly parcel taxes and leasing out district owned land for rental income. MVWSD also gets more state aid than does LASD, around $930 per student versus $360 in the category once known as "basic aid".

ResidentSince1892 is a registered user.


@Follow the Money: now do the other nearby districts against which LASD competes for staff

Report Objectionable Content
Email Town Square Moderator
4 people like this
Posted by Steven Nelson
a resident of Cuesta Park
on Apr 7, 2019 at 11:32 am

Report Objectionable Content
Email Town Square Moderator
4 people like this
Posted by Politics
a resident of The Crossings
on Apr 9, 2019 at 10:13 am

Politics is a registered user.


LASD implies that the money they transfer to BCS (~$8,000 per student) is a loss. This is misleading. What's missing is the revenue LASD gains for the same BCS students (~$13,000 per student).

So LASD nets ~$5,000 per BCS student that they're no longer on the hook to educate or provide services for. It's unclear how they've reported this in their budget.

For the same reasons, BCS students who would have instead gone private are a gain for LASD, not zero as they stated.

'Are they ready for fully innovative Indian food?' Ettan arrives in Palo Alto with chaat, caviar and a secret menu
By Elena Kadvany | 0 comments | 3,704 views

Flying: How to lower your impact
By Sherry Listgarten | 13 comments | 2,634 views