Quirky, popular market set to close down at the end of June 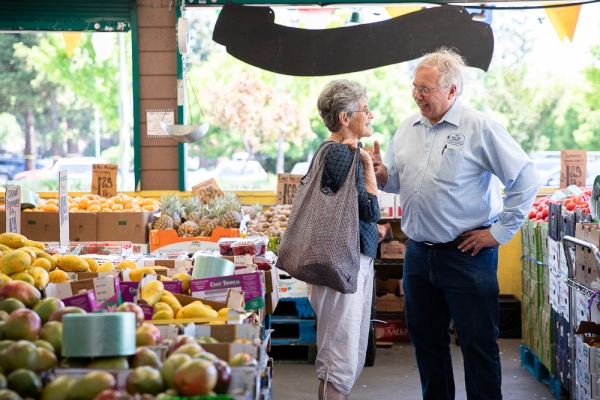 Steve Rasmussen, owner of the Milk Pail Market, chats with Hilda Crady, a customer of 45 years, in the grocery store on June 4. "It's just such a nice place to come to," said Crady. "I don't know where I'm going to get my chocolate now. I'm really sad." Photo by Magali Gauthier 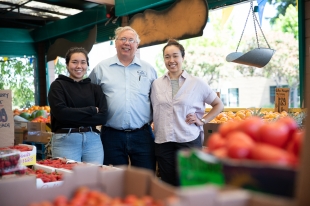 Steve Rasmussen, owner of the Milk Pail Market, poses for a portrait in the grocery store with his daughters Erika and Kai on June 4, 2019. Photo by Magali Gauthier

Amid plans to shut down permanently, the popular Milk Pail Market is throwing a farewell party for its loyal customers and community. The free event set for noon to 4 p.m. on Saturday, June 8, will feature music, activities and plenty of cheese samples.

For 45 years, the Mountain View grocery has been a local institution and a relic of the city's agricultural past. The former dairy-barn-turned-grocery became a beloved small business that persevered even as the area transformed into a tech hub. For years, Milk Pail owner Steve Rasmussen resisted calls to close down even as the neighboring properties at the San Antonio shopping center were rebuilt into towering office projects.

After holding out for so long, it was something of a shock when Rasmussen announced in March that he had accepted a buyout, saying it was becoming too difficult to stay in business. The goodbye party, he said, was one last opportunity for everyone to appreciate the Milk Pail.

"We've been a small business for so long, and key thing here is we want to give the community a chance to say goodbye," he said. "My family thought it was only right for the Milk Pail that we do the best we can, and give ourselves one last party."

No firm date has been set yet for when the Milk Pail will close, but Rasmussen estimated it would be in late June.

The Saturday party will feature local music acts and a variety of family-oriented activities, including face-painting and raffles for various products. Food trucks will be stationed nearby with meals for sale, but Rasmussen said he also plans to serve free snacks and refreshments. Most of the party's attractions will not be staged at the Milk Pail but rather at a nearby patio between a Facebook office building and the Hyatt Centric Hotel.

The Milk Pail Market is located at 2585 California St.

Thank you Milk Pail for all the great food, service, and for being a Mountain View institution for all these years. You will be missed!

10 people like this
Posted by SharpenYourWriting Tutor/Coach
a resident of Another Mountain View Neighborhood
on Jun 6, 2019 at 2:40 pm

Milk Pail Market and the Mountain View library are my two favorite community resources. It is a huge loss!

Like this comment
Posted by Customer
a resident of Another Mountain View Neighborhood
on Jun 6, 2019 at 7:50 pm

You can get your chocolate online, I imagine.

Report Objectionable Content
Email Town Square Moderator
6 people like this
Posted by Trish Bubenik
a resident of another community
on Jun 7, 2019 at 9:41 am

Thank you for your generosity with non-profit organizations. I remember well your staff's decision to donate a nickel for every banana sold to the Red Cross after Hurricane Katrina. Their effort resulted in the $2,500 check you personally delivered to the local Chapter in Palo Alto. Your positive spirit made/makes a difference!! Thank you.

The first few seconds after awakening; before I remember the virus
By Chandrama Anderson | 0 comments | 3,471 views

Can you stay healthy without making more trash?
By Sherry Listgarten | 6 comments | 2,891 views

Think about helping others in our coronavirus-affected area
By Diana Diamond | 7 comments | 2,646 views