Peninsula beekeepers divided on the best way to fight a plague

Keepers disagree on whether to treat for varroa mites, which can wipe out hives 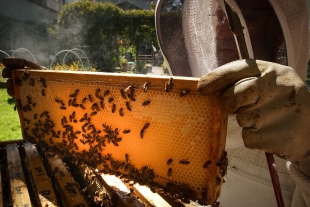 Burlingame beekeeper Bob Silverstein checks a frame from one of his hives. Photo by Philip Wartena.

'Are they ready for fully innovative Indian food?' Ettan arrives in Palo Alto with chaat, caviar and a secret menu
By Elena Kadvany | 0 comments | 3,640 views

Flying: How to lower your impact
By Sherry Listgarten | 12 comments | 2,598 views