Editorial: Let's all be lights for liberty

We need to continue to speak out against mistreatment of immigrants 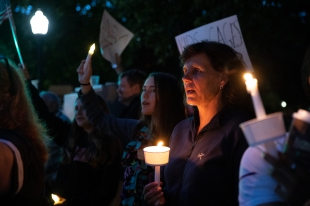 Jenny Murray stands at a candlelight vigil in downtown Mountain View to protest the treatment of immigrants and asylum-seekers at the Mexico-U.S. border on July 12, 2019. Photo by Magali Gauthier

Voters should send President Trump back to New York or Germany where his grandfather was born. But don't let him flee to Russia. He has more secrets than he has been able to whisper to Putin. The first lady just arrived in America. Maybe she should go back now. She should be happy and lucky to get away. Or, we could stop calling for people to go back and move forward with a more direct discussion of Trump's fitness for the Presidency. So, to make it easy, let's see how folks would fill in the blank: President Trump is the _______-in-chief.

Tough call. It's either:
-
Racist-in-chief

Either way, I pray it's "one-termer-in-chief". And when we look back, there will be much to remember. One thing that will stand out: the hypocrisy of the so-called "religious" right. And the russian sympathizers who still try to identify as "patriot".

The lack of any qualifying words such as illegal or undocumented, coupled with the lack of any name given as the author of the editorial, discredits this entire news outfit.

What chutzpah to try to get people to pay for this drivel.

Report Objectionable Content
Email Town Square Moderator
48 people like this
Posted by World Upside Down
a resident of Old Mountain View
on Jul 19, 2019 at 2:37 pm

If the editor wants real proof and an example of overcrowded and unsanitary conditions, including standing-room-only spaces and children without hot meals and showers he or she need look no further than at the RV encampments dotting the city.

Is the editor suggesting that all the men and women serving the county in ICE and the Border Patrol are engaged in illegal activities? Has the editor no shame? Where is the proof from the editor that Border Patrol agents are not compassionate? Do they really deserve the comparison to Nazi concentration camp guards or the suggestion that history is being repeated as they have created concentration camps? They are faced with unprecedented numbers of illegal immigrants, defined as those immigrants that don't make use of the normal and legal channels and laws to migrate to the United States. Provide proof that they are being held for more than a few days, weeks or months while the system attempts to absorb and process them all according to the law!

How many illegal immigrant adults and children arrive at the border in an exhausted, undernourished and/or diseased state or with life threatening illnesses or injuries. Whatever the number, do there conditions automatically become the fault of the United States?

And please provide specific examples of how immigrants are being mistreated in Santa Clara county? Does this include those that have broken our laws and are faced with deportation?