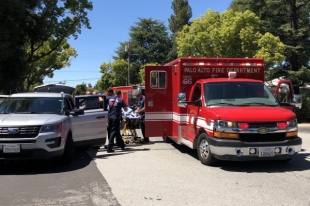 Palo Alto fire paramedics attempt to offer aid to a man accused of domestic violence, who is in the back of the SUV, shortly after he was apprehended at about 2:30 p.m. on Aug. 3 after a roughly 29-hour standoff. Photo by Gennady Sheyner.

I'm glad no neighbors or bystanders were harmed.

Get rid of the guns.

We've had mass murder by terrorists almost every other day.