Under new law, police may use deadly force only when 'necessary in defense of human life'

by Dan Morain and Laurel Rosenhall/CALmatters 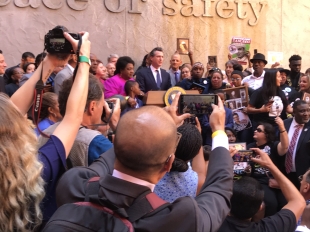 So what are officers supposed to do? Ask the subject of a domestic violence report whether the gun he is pointing at the officer is real, or a pellet gun?

Cops will never be able to win this kind of duel.

Seems like the new strategy for bad hombres is to always say that their gun is just a pellet gun.

This is insane. Make the police so worried about PC BS that our safety is now at risk. Like tying one hand behind their back and saying, now go keep everyone safe.

When are people going to WAKE UP to his ridiculous pandering?

Report Objectionable Content
Email Town Square Moderator
68 people like this
Posted by Criminals first
a resident of Bailey Park
on Aug 20, 2019 at 2:52 pm

@ MV Resident - the police are just supposed to hope that the criminals don't blow their head off. And if they do, they should just consider themselves collateral damage because criminals aren't expected to be responsible for keeping themselves alive by abiding by the laws. We're busy teaching criminals that their rights supersede those of all others, including the cops.

Report Objectionable Content
Email Town Square Moderator
57 people like this
Posted by Jake O.
a resident of Rengstorff Park
on Aug 20, 2019 at 2:58 pm

Thank you Gov. Newsom! Because of you, I can sleep easy tonight.

Report Objectionable Content
Email Town Square Moderator
54 people like this
Posted by Registered to vote
a resident of Old Mountain View
on Aug 20, 2019 at 3:32 pm

This is a travesty. I'd expect police departments will have difficulty in recruiting good officers due to this law. As a result we will have less and less law enforcement. We will need to carry and defend ourselves. Wild wild west here we come!!

Report Objectionable Content
Email Town Square Moderator
42 people like this
Posted by Criminals first
a resident of Bailey Park
on Aug 20, 2019 at 3:44 pm

@Registered to Vote- I was thinking the same thing. You'd have to be crazy to be a cop these days. The end result of Black Lives Matter will be more black lives lost to black-on-black crime where cops don't want to intervene.

Report Objectionable Content
Email Town Square Moderator
8 people like this
Posted by Sitting duck
a resident of another community
on Aug 21, 2019 at 1:50 pm

So lemme get this straight... The Democratic People's Republic of Kalifornia wants to eliminate the right to own firearms AND wants to cripple police at the same time?

'Are they ready for fully innovative Indian food?' Ettan arrives in Palo Alto with chaat, caviar and a secret menu
By Elena Kadvany | 0 comments | 3,628 views

Flying: How to lower your impact
By Sherry Listgarten | 12 comments | 2,597 views