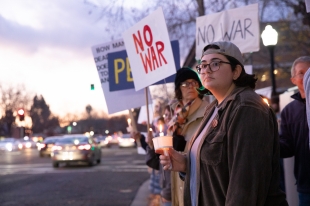 Maura Wilson holds a candle alongside about 50 other protesters at a candlelight vigil protesting the escalating conflict between the U.S. and Iran at the corner of El Camino Real and Castro Street on Jan. 9. Photo by Magali Gauthier

Lots of things don't age well in the era of Trump, such as Trump's claim of imminent danger, then it was the Baghdad embassy, then it was multiple embassies, then by his rally last night: 4 embassies.

First it was 1 target, just the Iranian leader. Now we're hearing it was multiple targets.

Thank heavens the Iranians decided to end this by lighting off some missiles towards an empty part of a US base. Wiser heads are deescalating. Then Trump imposes sanctions. What next - another assassination? It takes a Trump to grab defeat from the jaws of victory.

Today: "The American military unsuccessfully tried to kill a senior Iranian in Yemen on the same day a drone strike took out Maj. Gen. Qassim Suleimani..."

Sounds like the no war people are a bunch of Pro-Trumpers.

Report Objectionable Content
Email Town Square Moderator
4 people like this
Posted by Andy
a resident of Whisman Station
on Jan 10, 2020 at 6:55 pm

Looks like drones can kill most anyone in any country. Killing leaders using professions and maybe some convicted criminals has its PROS AND CONS. Just wait until AI operates killer drones. Then, only the correct targets will be taken out.

Report Objectionable Content
Email Town Square Moderator
24 people like this
Posted by ZeroZero Win
a resident of Monta Loma
on Jan 10, 2020 at 8:35 pm

No war with Iran! Peace!

Report Objectionable Content
Email Town Square Moderator
11 people like this
Posted by Huh?
a resident of Another Mountain View Neighborhood
on Jan 12, 2020 at 1:48 pm

Jobs not war? What decade are these grannies from? 50-year employment high.

Looks like they just reused their signs from 2003. So, +1 on recycling and stuff.

Report Objectionable Content
Email Town Square Moderator
8 people like this
Posted by imminent danger?
a resident of Sylvan Park
on Jan 12, 2020 at 2:35 pm

You prefer guns over butter, war over peace?

news on Trump's using the military, much like he uses 'diplomacy', for his personal gain. From the Wall Street Journal:

Reports indicate "that Mr Trump has told associates that he ordered the killing of Quds Force leader Qassem Soleimani amid pressure from Republicans who wanted him to take a stronger stance towards Iran.

“Mr Trump, after the strike, told associates he was under pressure to deal with Gen Soleimani from GOP senators he views as important supporters in his upcoming impeachment trial in the Senate”

Anything to buy a vote to keep from going to jail in 2021 for corruption.

Report Objectionable Content
Email Town Square Moderator
10 people like this
Posted by psr
a resident of The Crossings
on Jan 13, 2020 at 3:59 pm

You think this is a "payoff" to senators before the "impeachment" trial for his "personal gain"? Are you serious?

Solemani was an evil, murderous beast who killed Americans, Iranians and anyone else that got in his way or the way of the despots running Iran. His removal is way past due. The President's JOB is to protect the country. I'm sure that many aren't used to a President acting in the best interests of the country after eight years of one with globalist aims, but that is what is supposed to be the role of that job.

As for a "payoff", I suppose that is how you will explain his inevitable exoneration in any trial. It wouldn't occur to you that conviction would require evidence, which has yet to be presented by the House. Of course, since Pelosi thinks she is somehow entitled to run the Senate trial according to her rules, it's possible there will never even be a trial. The Senate will require evidence and, so far, there has been nothing but a parade of disgruntled individuals proclaiming their dislike of the President. That isn't proof of wrongdoing on his part, but it is evidence of their inability to deal with others having different opinions than they do.

As for your theory, you should probably hit the reset on your reality button.

Report Objectionable Content
Email Town Square Moderator
24 people like this
Posted by imminent danger?
a resident of Sylvan Park
on Jan 13, 2020 at 6:32 pm

Yes. Did you read the WSJ report?


> Solemani was an evil

Yes. And the fringe right has been lying about The Left lionizing him. Are you?


> The President's JOB is to protect the country.

Indeed. This hasn't changed anything. There was a missile attack yesterday, the same type of attack that supposedly precipitated this whole thing: "At least four Iraqi soldiers have been wounded when several rockets slammed into an Iraqi airbase north of Baghdad which has housed troops from the United States" Web Link

Luckily, no US personal were at the base at the time, though they were there previously.

She never said that, and unless you are a psychic, you're a liar. All she asked for was a set of trial rules so she can appoint an appropriate manager. She did say: “In an impeachment trial, every Senator takes an oath to ‘do impartial justice according to the Constitution and laws... Every senator now faces a choice: to be loyal to the president or the Constitution.”


> ...it's possible there will never even be a trial. The Senate will require evidence...

That's a start for anyone seeking truth. Do you seek the truth?


> I suppose that is how you will explain his inevitable exoneration in any trial.

Trump has said for weeks that John Bolton and others should testify.

If they aren't allowed to testify, then yes, it's a shame trial. Trump will call it 'exoneration' but you and I know that without witnesses and evidence as YOU CALLED FOR, it will be merely a Show Trial.


Thanks for playing. Next time don't step in it by asking for witnesses and evidence. See ya...

Can you Pay to Reduce your Carbon Footprint?
By Sherry Listgarten | 8 comments | 2,178 views

You Can Help: Scents and Migraines
By Chandrama Anderson | 0 comments | 1,907 views