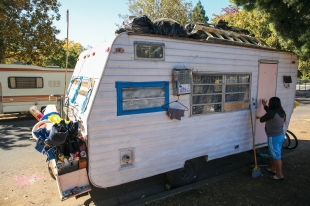 Marisol Gonzales knocks on the door of a neighbor along Crisanto Avenue in Mountain View on October 22, 2019. With "safe parking" programs for vehicle dwellers rolling out throughout Santa Clara County, the Board of Supervisors agreed on Jan. 14 to help cities find new sites for those without permanent homes. Photo By Sammy Dallal

On TV (city channel 26) I caught the end of the agenda item Tuesday night regarding the referendum challenging the City Council's passage of an "oversized vehicle" ordinance. It appeared that the Council had placed the matter on the November ballot for voters to decide whether to approve or reject it. There will also be candidates on the November ballot for President and on down - including for City Council. Meanwhile, the "oversized vehicle" ordinance does not take effect. But, if I remember right, there is a 72-hour limit on parking on a city street without moving that could be more often enforced.

The 72 hr. limit is sometimes already enforced! (perhaps not much and it seems Not Enough). My own small RV (oversized - too Tall) was ticketed a few years ago, near a school, for exceeding the 72 hrs. About $82 I think.

Should I park it in my backyard, and Air B&B it? Without registering, like those large apartment owners (both rent control and short term rentals). Sounds like a dumb ass plan!

But what about as an Accessory unit, a month-to-month rental?

=== humor aside === Supervisor Cindy Chavez - in Mercury News coverage 1/15/20, shows she is not a Democratic Suburbanite (unlike Mayor MAK), pp B1 Local News ""Mountain View restricting RVs on their streets ... they did that without having a place for the RVs to go, and I worry other cities will get impacted. What I don't want to do is reward behavior that isn't aligned with what we're trying to accomplish."

Report Objectionable Content
Email Town Square Moderator
8 people like this
Posted by The Registrant
a resident of Another Mountain View Neighborhood
on Jan 15, 2020 at 3:07 pm

This is incredibly good news. Voters have been hungry for a say in this matter and frustrated with the do-nothing approach that has perpetuated this problem.

Report Objectionable Content
Email Town Square Moderator
10 people like this
Posted by Dan Waylonis
a resident of Jackson Park
on Jan 15, 2020 at 3:23 pm

The only viable solution to this problem is to create more housing -- of any price range. The best thing the city could do would be to relax building regulations and reduce permit costs.

With respect to RVs, if the city increases funding and support for them, there will be more RVs. If the city (and voters) decide that they want fewer RVs, then passing laws to limit their available parking space will solve that problem.

Can you Pay to Reduce your Carbon Footprint?
By Sherry Listgarten | 8 comments | 2,166 views

You Can Help: Scents and Migraines
By Chandrama Anderson | 0 comments | 1,899 views