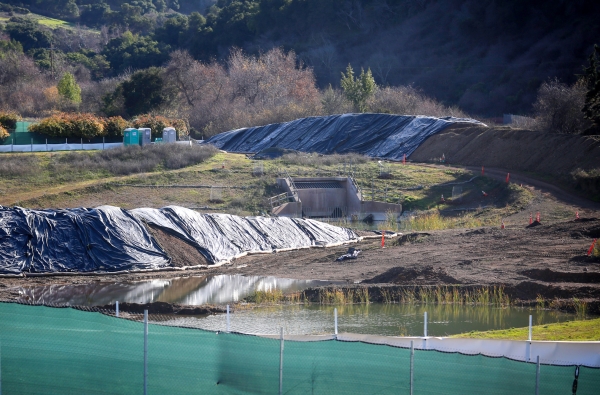 Work on the Rancho San Antonio's flood detention basin is 16 months behind schedule after an "unexpected archaeological discovery" of Native American remains, adding to the project's cost overruns. Photo by Sammy Dallal 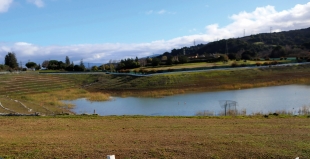 A view of the Rancho San Antonio County Park detention basin is photographed on Jan. 13, 2020. The Permanente Creek Flood Protection Project will provide natural protection for at least 2,200 properties in Mountain View and Los Altos. Photo by Sammy Dallal

Construction projects aimed at providing flood protection to thousands of Mountain View properties is over budget and more than a year behind schedule.

The Santa Clara Valley Water District's board of directors signed off on another round of funding in November for $4.7 million, aimed at offsetting cost overruns that ate through most of the project's contingency fund. As of this month, the flood protection projects are now expected to cost $88.5 million, according to district staff.

The funding boost addresses the latest in a series of overruns that have ballooned the cost of the Permanente Creek Flood Protection Project, which includes two detention basins designed to take on floodwater and protect homes primarily located in Mountain View. The basins -- located at Rancho San Antonio and McKelvey Park -- would protect large swaths of the city, including Shoreline West and Cuesta Park, in the event of a 100-year flood, which has a 1% chance of happening in any given year.

When the basins will be complete and how much they will cost has been a moving target since construction crews broke ground in 2017. Just over $39 million has been budgeted for McKelvey Park, which has been transformed into a sunken baseball field with a mini-park. Originally slated to be completed in March 2019, the park's opening was delayed until July, then December, and is now expected next month. A ribbon-cutting ceremony is scheduled for Feb. 29.

Though McKelvey Park was paid for almost entirely by the water district, the city of Mountain View pitched in $250,000 in funding for the park. The City Council originally agreed to pay $175,000 for "coordination" with the water district, the Council approved an extra $75,000 to pay for batting cage nets, rubber mats for dugouts and other amenities for the two baseball diamonds.

The big trouble spot for budget woes is Rancho San Antonio, where the flood basin faced a 16-month delay from an "unexpected archaeological discovery," and won't be done until the end of 2020. Though water district officials have been tight-lipped about the nature of the discovery and, at board meetings have avoided directly stating what was found, district reports and documents indicate that contractors found Native American remains at the site.

The district has since hired Andrew Galvan -- a member of the Ohlone Indian Tribe -- to act as the "most likely descendant" to oversee the recovery and treatment of the archaeological discovery. Along with approving a $3 million bump to the contingency fund for the project at the Nov. 12 meeting, water district board members voted to kick in another $250,000 for Galvan's Native American consulting services.

The latest cost estimate for Rancho San Antonio's flood basin is just under $26 million, due to a long list of unexpected higher costs. Contractors ran into delays when they discovered a PG&E gas line directly conflicted with the construction of an 84-inch inlet pipe, and at one point had to relocate California red-legged frogs found in the northern basin.

I'm grateful that these flood control projects are near completion. Checking the FEMA maps, my home's flood risk has already dropped to the 500-year-flood category, thanks to these improvements.
I have been following these projects since the earliest public presentations of flood-control options by (what is now) Valley Water. At one of these public sessions a man from Los Altos actually proposed that instead of spending money to mitigate flood risk, the homes at greatest risk (i.e., Shoreline West) should be torn down! Of course the flood risk would have been mitigated decades ago if the orchards of Los Altos had remained as they were, instead of being paved and built over with thousands of homes.

I think the previous comment includes false information.
When there is significant rain, Permanente Creek is fast flowing, and this is not just water from the neighborhood. You can experience this yourself by looking where it goes under the bridge in park drive in mountain view. During an atmospheric river event it's impressive there.
It's also false that it never flooded - it did last time in the 90s. You can look this up yourself.
It's difficult to understand why people argue so strongly against the flood protection efforts, and why do that with false information? Do they have a beef with whoever is implementing them?

The first few seconds after awakening; before I remember the virus
By Chandrama Anderson | 0 comments | 2,770 views

Can you stay healthy without making more trash?
By Sherry Listgarten | 2 comments | 2,045 views

Think about helping others in our coronavirus-affected area
By Diana Diamond | 4 comments | 1,961 views