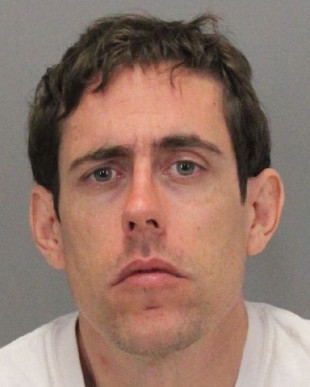 John Patrick Root, 35, of San Francisco, was convicted of sexually abusing a 15-year-old girl while teaching music at School of Rock in Palo Alto. Now the music school has been sued by the girl's family. Photo courtesy Palo Alto police.

The man got "up to one year" in county jail! But actually served what? Six months? Six days? Probation? What was the crime to which he pled guilty or no contest as part of a PLEA BARGAIN with the Santa Clara County DA's Office? Was the girl not a cooperating witness? Did he have a criminal record? Is the man now a registered sex offender? Where does he live? Where is he working?

For sexually abusing an underage teen he only got 1 year in county jail? No big deal, right? No wonder it was worth it to him to do engage a minor sexually. Why doesn't California have stronger penalties for actions that do so much damage to young people?!

In response to Amy: Megan's Law is the name of the CA State website for sex offender look up.
He may not be able to get a job. The State paid for his jail stay and may pay for his freedom afterward as he won't be very employable. Though, it sounds like he already wasn't very employable. It sounds like he has some problems that may lead to future convictions. A troubled person who goes around hurting others.