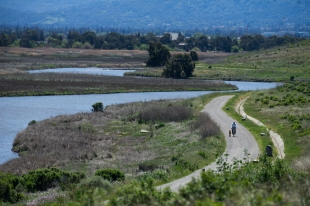 Combating the effects of climate change on local baylands was among the topics discussed at a forum for state Senate District 13 candidates on a range of environmental topics at Menlo-Atherton High School. Voice file photo by James Tensuan

Kate Bradshaw writes for The Almanac, the sister publication of MV-Voice.com.