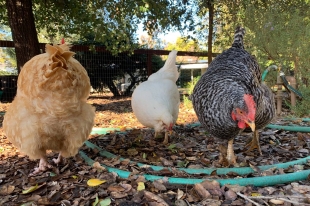 A bit more than 10 years ago, Isabelle Cnudde bought a small flock of chickens for her backyard to ensure that she had a humane source of eggs. Little did she know that within a few years, she would be helping to educate others about keeping chickens — and even teaching some of her own hens a card trick.

Through Clorofil, the nonprofit animal "micro-sanctuary" she founded, Cnudde regularly offers chicken care classes for newbies and those considering backyard chickens, as well as people who already have chickens at home.

The sustained popularity of backyard chicken coops in Silicon Valley over roughly the past decade is a phenomenon that's garnered national attention in the New Yorker and Washington Post (though mostly for flashier aspects, such as ornately decorated coops or the fancy meals served to some birds).

By now, most local cities have some provision on the books for keeping a small number of hens in backyard coops. Palo Alto and Mountain View, for example, both require permits to keep chickens.

According to Palo Alto's animal control department, there are "between 40 and 60 active permits at any given time" for chickens and occasionally other livestock — the number fluctuates, staff said.

In any case, our region is home to enough unique urban chicken-raisers to support the Tour de Coop — an annual self-guided bike ride/tour of area chicken coops aimed at inspiring others to keep chickens. The 2020 tour will take place in May.

Despite Cnudde's training prowess, Clorofil's chicken-focused classes won't turn backyard birds into little avian card counters, though Cnudde has posted a step-by-step card trick how-to on YouTube. However, her trick — in which a hen learns to identify a specific card, like the queen of hearts, from a lineup of cards — highlights what Cnudde suggests might be a lesser known aspect of keeping chickens: The birds are smarter than people might think, and are entertaining pets with personalities all their own.

"They really are companion animals. They're very fun little creatures and pretty smart. You don't know until you are living with them," she said.

The Clorofil micro-sanctuary at Cnudde's home in Los Altos' Loyola Corners neighborhood currently has eight chickens in residence. In addition to experience with her own birds, Cnudde acquired her knowledge about chicken well-being as a volunteer helping to rescue hens from industrial farms with the organization Animal Place. In fact, that's how she expanded her own home flock, adopting chickens rescued from the egg industry. She now encourages those interested in keeping chickens to adopt rescue birds, rather than buy chicks.

Cnudde's own original flock was made up of three chickens she purchased at a hatchery, but when one hen was killed by a hawk and she needed to bring in another bird to fill out the flock, she said she began to wonder about chicken adoption. Online research on that topic led her to Animal Place. Her now-substantial experience with chickens has given her a great appreciation for the creatures.

"I realized they are amazing animals. I was vegetarian when I started to have chickens and that was part of why I wanted them. They have taught me a lot," she said, noting that she's now a vegan because of her experiences.

Clorofil offers two chicken care classes. "Gearing Up for Pet Chickens" is for beginners, as well as those who are trying to decide if keeping chickens is a good fit for them. The class covers the very basics: how to house, feed and care for chickens.

"I'm trying to be really down-to-earth, realistic, not sugarcoat anything. Having chickens in the backyard always seems very idyllic, because they are fun and they are very social animals, but they are also work. They can live up to 10 years. So it's a long-term commitment, having chickens. I'm trying to address all of that so people can make the right decision," Cnudde said.

The second, more advanced class, "Happy & Healthy Pet Chickens" focuses on maintaining a flock, and is aimed at people who already keep chickens.

"We really spend half of the class just talking about health: how to detect injuries, illnesses and learning all the skills so that you can do things yourself at home. Some of the issues, you have to go to the vet, but there are things you can do yourself, and that's what I'm trying to get people to learn.

This class also explores managing coop dynamics, including how to introduce new chickens to the flock, understanding the "pecking order" (which is a real thing), and coop "enrichment," which aims to keep chickens busy and entertained. That will help them avoid problem behaviors, such as pecking at each other.

"They are smart, so they want to be busy and do things, and oftentimes, they end up cooped up, in a run, with basically bare soil because they have eaten everything and they get bored. And when they are bored, they are like us: They start making mischief," Cnudde said.

"I always tell people: 'Think of your chickens like 2-year-old kids in your backyard. You have to keep them busy. Give them fun stuff to find and (opportunities to) climb and scratch, things like that,'" she added.

Cnudde frequently leads the classes at local community or recreation centers and when the classes are close enough to home, she may bring one of her hens to class to demonstrate the finer points of performing a chicken health check. When the class is more far-flung, such as a recent session she offered in Aptos, she brings a stuffed chicken model instead. She also relied on the model for demonstrations during a statewide outbreak of a poultry disease last year, leaving her hens at home.

"Last year I didn't do it (bring a hen to class) because there was the Newcastle disease and that was a big concern, so basically it was a strict quarantine for all the birds," Cnudde said.

She also is available to do home consultations.

For anyone considering chickens, she said, it's important to think about the time and work they will likely require.

"Consider the long-term commitment: it's 10 years average. Ginger, my very first hen, is about 11 now. You don't get hens to get cheap eggs. You do it because you enjoy it. It really takes time and resources," Cnudde said.

Clorofil's next Midpeninsula classes take place in April and May at the Los Altos Community Center, 97 Hillview Ave., Los Altos. For more information about classes or to find chicken resources, visit clorofil.org.

Singapore's oldest cafe was about to open in Palo Alto. Then, the coronavirus hit.
By Elena Kadvany | 2 comments | 5,629 views

A Pragmatic Approach to A Trillion Trees
By Sherry Listgarten | 4 comments | 4,197 views

Repairing a Disagreement with your Beloved & “Physical” vs. “Social” Distancing
By Chandrama Anderson | 2 comments | 2,883 views

The University of California’s flexible policies during COVID-19
By John Raftrey and Lori McCormick | 6 comments | 2,746 views