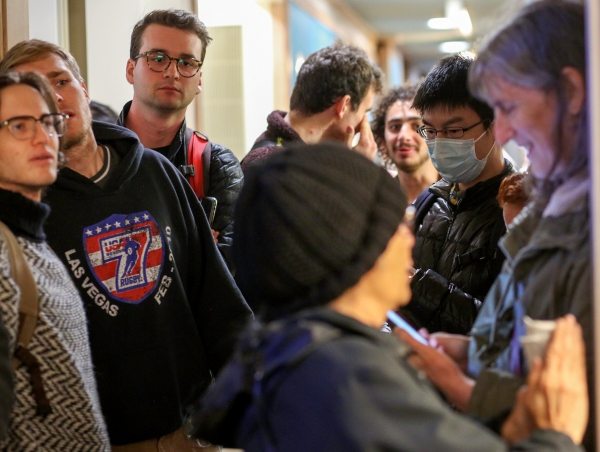 Kevin Chen wears a mask because he has a slight cold and doesn't want to put other people at risk of catching a cold at Stanford University on Feb. 3, 2020. Photo by Sammy Dallal

With 20 people across Santa Clara County who have tested positive for the new coronavirus (COVID-19), companies and event organizers across Mountain View are heeding new county guidance to minimize the risk of spreading the virus.

Among the new directives issued March 5 by Dr. Sara Cody, Santa Clara County's top health officer, are for employers to consider allowing people to work from home and for people to cancel or postpone mass gatherings or large community events where people are in close proximity to each other.

In addition, the county is investigating a possible death due to the new coronavirus in Sunnyvale.

Dr. Cody's guidance also includes recommendations for employers to reduce the spread of COVID-19. They are:

● They should minimize the number of employees working within an arm's length of one another and minimize or cancel large in-person meetings and conferences.

● Employees should be urged to stay home when sick and offered flexibility for sick leave benefits.

● Employers should also consider allowing employees to work from home and staggering start and end times for work.

● Employers should not require employees to have a doctor's note if they are sick, since health offices may be busy and unable to offer immediate documentation of a patient's illness.

In response to the county's guidance, Facebook has asked all of its Bay Area employees to stay home starting March 6, with the exception of some full-time employees and contractors needed to monitor safety and security of the digital platform, according to Facebook spokesperson Anthony Harrison said, Facebook is "strongly recommending" that all Bay Area employees and contingent staff work from home starting Friday, March 6, to minimize the risk of spreading COVID-19. It's also canceling all Bay Area events and recommending employees cancel all business travel in and out of the Bay Area.

Google, as of Friday, is giving employees in its Bay Area offices the option to work from home, if their positions permit it, as part of a test for the company's "business continuity processes," according to a Google spokesperson.

LinkedIn told its Bay Area employees to do any work that can be done remotely at home through the end of March to mitigate the spread of the virus.

Employees have also been asked to postpone all nonessential business travel and will not participate in external events in March and April, according to LinkedIn spokeswoman Kenly Walker.

LinkedIn, headquartered in Sunnyvale and Mountain View, will not be shutting down its offices and intends to provide the same level of service to customers, members and partners, she added.

In addition, on March 6, Facebook, Twitter, Microsoft and Google made a public commitment to their hourly and subcontracted workers who need to stay home, saying they will be paid their regular wages.

The county Public Health Department's recommendation to postpone or cancel large gatherings and events has triggered a series of event cancelations in Mountain View this weekend and throughout the remainder of March.

The Mountain View Police Department's second annual #SheCan women's empowerment event, scheduled for Saturday, March 7, has been postponed due to "increased concern" about the spread of the virus, according to a statement released by the department Thursday afternoon. No new date has been scheduled for the event.

"This decision was not made lightly," the statement said. "We were looking forward to having more than 300 participants attend this weekend. However, we are also cognizant of the health concerns, and with the serious worries about the increased risk of exposure outlined by the county health department."

Other events nixed include Los Altos High School's annual Latino Summit, scheduled for Saturday, as well as an annual breakfast event for the nonprofit Community Health Awareness Council (CHAC) on March 24. The breakfast is hosted at LinkedIn's Mountain View offices on Middlefield Road, but the tech company announced Thursday that all onsite events have been canceled through April of this year.

"That means that this year's (fundraiser) is no longer viable for us to offer as a live event," the nonprofit said in a statement Friday. "As a community-based health agency, our No. 1 concern is of course for the health of our population, so we support LinkedIn's decision 100%."

"A soup supper event on a Sunday afternoon is very popular with seniors, and we decided to err on the side of caution," Myers told the Voice. "We decided it was best to cancel that event."

The city of Mountain View is currently assessing whether to postpone or cancel any of its upcoming programs and events, and said in a statement that a list of any changes would be made available sometime Friday evening.

Updates on more Midpeninsula events that have been canceled can be found here.

In Sunnyvale, the Sunnyvale Department of Public Safety reported March 5 that seven of its officers were potentially exposed to the coronavirus during a medical call, and were quarantined by the department before being released later that day.

According to a Sunnyvale Police Department tweet, the officers performed CPR on a 72-year-old patient who was unconscious and not breathing.

The department later learned that the patient, who did not survive, had recently been on a cruise in which two passengers were suspected of having COVID-19. It has not yet been confirmed whether the patient was infected with COVID-19.

Steve Rocheville of the Sunnyvale Public Safety Officer's Association said in a statement that he was "grateful" the department took the potential exposure seriously.

"We will continue to work with the Department of Public Safety leadership on the department's response to this exposure and any potential future exposures as our officers will undoubtedly be putting themselves at risk as they continue to provide emergency medical services to our community," Rocheville said.

The Mountain View Police Department has not received reports that any of its officers have been exposed to the virus.

What are your questions about the new coronavirus? Do you have an update we should know about? Contact Mountain View Voice reporter Kate Bradshaw at kbradshaw@mv-voice.com.

@resident: Yes, even if those hourly workers don't come to work. Of course they will be paid if they do come in.

From the article: "In addition, on March 6, Facebook, Twitter, Microsoft and Google made a public commitment to their hourly and subcontracted workers who need to stay home, saying they will be paid their regular wages."

How long till it gets here ?

Report Objectionable Content
Email Town Square Moderator
6 people like this
Posted by MV
a resident of Cuernavaca
on Mar 7, 2020 at 7:16 am

While the tech companies are doing their best to stop the spread, it is important the schools also think about it. They should think about closing / remote classes ASAP. This would greatly help to contain.

Report Objectionable Content
Email Town Square Moderator
10 people like this
Posted by Member
a resident of Blossom Valley
on Mar 7, 2020 at 2:52 pm

This is the most over ridiculous crazy level of fear mongering insanity over reaction I’ve ever seen. If this was never reported, it would just go through the world as a bad flu season and nothing more. Workers been coming to work with fevers every flu season that kills 100s of people every single day.

Let’s it run its course, anyone with health issues should already been taking the same precautions for normal annual bugs and viruses.

This is beyond insanity, fear mongering staring at phones counting every death.

Report Objectionable Content
Email Town Square Moderator
17 people like this
Posted by S1
a resident of Another Mountain View Neighborhood
on Mar 7, 2020 at 4:33 pm

This is not fear mongering insanity. We are talking about containment. If we don’t contain it today, it might lead to a possible lockdown like in other countries.

Report Objectionable Content
Email Town Square Moderator
5 people like this
Posted by Odd
a resident of Cuesta Park
on Mar 7, 2020 at 8:28 pm

What is interesting is the reactions of some and the level of reporting. Sunnyvale quarantines their staff after a statement of a possible exposure. No facts. It is the complete opposite of they way they normally work where you need more than just a "statement." The result, the patient that passed did not have any symptoms and did not have the COVID-19. I am sure Mountain View PD has had contact with someone that carried the virus they just don't know it.

The bigger over reaction is Stanford. One staff member is positive and they shutdown all class? Stanford is a city within a city. That is about 20,000 people. One person or even ten people is not even one percent.

Why were the events in Washington so extreme? Because it was a contained facility with a staff that are not regular healthcare workers that understand the importance of patient contact and containment.

Washing ones hands and cleaning of common areas is what needs to be part of culture. If anything is to be learned about this is the importance of cleaning and support staff that keep our work places clean....not just Taking out the trash.

Wash your hands and don't live in fear.

Singapore's oldest cafe was about to open in Palo Alto. Then, the coronavirus hit.
By Elena Kadvany | 2 comments | 5,415 views

A Pragmatic Approach to A Trillion Trees
By Sherry Listgarten | 4 comments | 4,185 views

Repairing a Disagreement with your Beloved & “Physical” vs. “Social” Distancing
By Chandrama Anderson | 2 comments | 2,870 views

Get fact-based reporting on the COVID-19 crisis sent to your inbox daily.