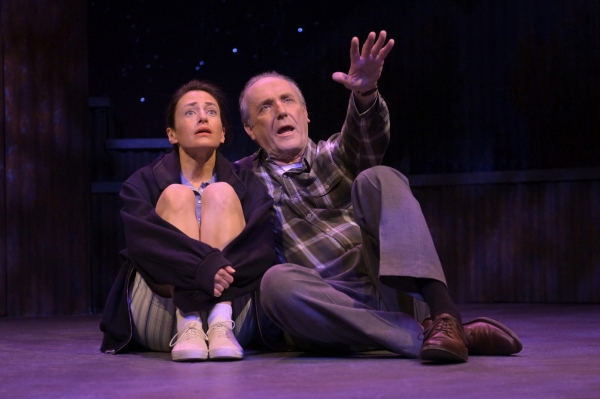 Pioneering aviator Jerrie Cobb (Sarah Mitchell) and her dad Harvey (Dan Hiatt) talk about flying in "They Promised Her the Moon," presented by TheatreWorks Silicon Valley. Photo by Kevin Berne. 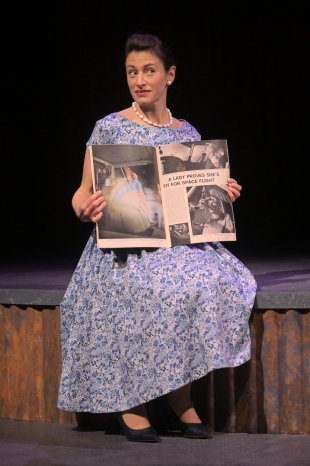 NOTE: Performances have been canceled as of Thursday, March 12.

With an opening weekend fittingly including International Women's Day, TheatreWorks Silicon Valley offers the Northern California premiere of Laurel Ollstein's "They Promised Her the Moon."

The play tells the story of Jerrie Cobb (played by Sarah Mitchell), a brilliant American aviator who hoped to be the first woman to go to space, only to have her astronaut dreams thwarted by sexism.

The show begins in 1960 when record-breaking female pilot Jackie Cochran (Stacy Ross) provides private funding to Dr. Randy Lovelace (Anthony Fusco) and his team to recruit qualified women, including Cobb, to become part of "Mercury 13." The female recruits undergo the same rigorous physical and psychological tests as the celebrated male astronauts in NASA's Mercury program, to determine the possible effects of space travel on the human body and decide who would likely make successful candidates. Cobb passes the grueling tests, including spending nearly 10 hours in an isolation tank, doing better, in fact, than most of the men. She's hailed in the media as the first "lady astronaut" and feels sure her dreams are about to come true. Historical spoiler alert: It doesn't turn out that way. NASA, the U.S. government and society at large, it seems, are not ready to accept the idea that women could help lead the space race.

Ollstein's play, well-directed by TheatreWorks' Artistic Associate and Director of New Works Giovanna Sardelli (who brought the show to the New Works Festival a few years ago), explores Cobb's story first in flashbacks, from her childhood as a shy, tongue-tied kid in Oklahoma, where she enjoys the support of her alcoholic pilot father (Dan Hiatt) and clashes with the stereotypically conservative, traditional values of her very religious mother (Luisa Sermol). Cochran, a cocky, wealthy, glamorous ace aviator who led the Women Airforce Service Pilots during WWII and also runs a successful cosmetics company, is Cobb's idol who becomes her mentor and, eventually, her frenemy.

The audience feels Cobb's heartbreak at having her dreams dashed for reasons of prejudice. The Soviets ended up with the first woman in space -- Valentina Tereshkova, who in 1963 shattered Glenn's orbit record and is still the only woman to have completed a solo space mission -- and it would take decades for America to finally bridge the gender gap, with Stanford University's own Sally Ride in 1983.

But this is Cobb's tale, and Mitchell gives a fine performance as the awkward, deeply spiritual woman with a backbone of steel, who should have become a major name in American history. Ross, though, as the more flamboyant, comical and shrewd Cochran, also makes a strong impression, drawing the limelight whenever she's on stage. The rest of the cast takes on multiple roles, including flesh-crawlingly sexist newscasters, a pair of blustery opposing congressmen and Craig Marker as John Glenn, the swaggering American astronaut who embodies masculine heroics and condescendingly deters gender equality in the space program.

The tech crew of this production, especially lighting designer Steven B. Mannshardt and sound designer Jane Shaw, deserve much recognition for their work here, handling numerous intricate and nuanced changes in light and sound cues in smooth and quick succession. While some of Ollstein's lines drift into cliche territory (especially where Sermol's pie-baking mother are concerned), there are moments when the script, Mitchell's voice, and the show's visual and audio effects come together in ways that are simply stunning.

"They Promised Her the Moon" comes to the local stage on the heels of the very recent death of Katherine Johnson, the African American female NASA mathematician critical to early spaceflight, whose story is celebrated in "Hidden Figures." It also comes at a time when many are feeling frustrated thanks to society's ongoing misogyny, writ large right now with the dwindling likelihood of a woman president being elected any time in the near future. This makes the show more than just a look back into history at a figure who deserves to be better known. It also gives it a relevance to the present that helps connect Cobb's crackling anger and sadness to that of some in the audience.

"Men have walked all over you," Cobb says to her beloved moon near the show's end. "I know how that feels."

What: "They Promised Her the Moon."

When: Through March 29. Showtimes vary.

Due to ongoing public health concerns, events may be canceled with short notice. Call ahead to confirm.

A Pragmatic Approach to A Trillion Trees
By Sherry Listgarten | 2 comments | 3,745 views

The University of California’s flexible policies during COVID-19
By John Raftrey and Lori McCormick | 6 comments | 2,509 views

Repairing a Disagreement with your Beloved & “Physical” vs. “Social” Distancing
By Chandrama Anderson | 1 comment | 2,465 views