Still stuck at home: Local schools can't accommodate every child who wants to be back in class full time
Nine-year-old Steven Brody desperately wants to be back in his Bubb Elementary classroom four days a week, just like his... Last comment 3 hours ago | 20 comments

A New Shade of Green
by Sherry Listgarten
Bold coyotes at Windy Hill
May 17, 2021 | 6 comments

"Vintage Planes at Moffett "
The P-51 Mustang, nicknamed "Betty Jane," on display at Moffett Air Field Submitted by Frank Paul Perez on May 17, 2015

Santa Clara County officials happily announced Tuesday that the county will move to the state's yellow tier on Wednesday, the least-restrictive level for reopening during the pandemic. Tuesday, 1:53 PM

Landlords of rent-controlled units in Mountain View will only be able to raise the rent by up to 2% this year, the lowest cap on increases to date and a clear sign that COVID-19 has hindered economic growth in the Bay Area. Tuesday, 1:31 PM | 5 comments

When President Joe Biden hailed new guidance from the CDC for fully vaccinated people last Thursday, his words struck a hopeful chord with some owners of businesses large and small -- while completely baffling others. Tuesday, 9:29 AM | 1 comments

Santa Clara County supervisors will decide whether to use court-ordered treatment to help those suffering from severe mental illness, opening the door for coerced care for those who refuse help. Monday, 1:43 PM

A legislative proposal to reform the governance structure at the Santa Clara Valley Transportation Authority will not advance this year after its author, Assembly member Marc Berman, opted to defer his bill to 2022. Monday, 9:55 AM

Gov. Newsom is proposing to spend California's $100 billion windfall on schools, small businesses, homelessness and more, while campaigning against the recall at the same time. Sunday, 8:47 AM | 5 comments 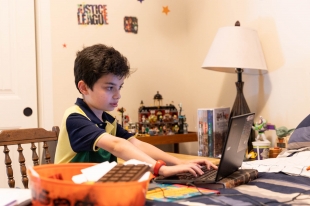 Still stuck at home: Local schools can't accommodate every child who wants to be back in class full time
Nine-year-old Steven Brody desperately wants to be back in his Bubb Elementary classroom four days a week, just like his sister. He is one of the unlucky students relegated to coming in twice a week, stuck at home, angry and left out. Friday, 1:23 PM | 20 comments

Nine California high school seniors have been named U.S. Presidential Scholars, including three from San Jose and one from a Mountain View private school. Saturday, 8:58 AM | 1 comments

A 46-year-old man pleaded no contest to assault and theft charges after he attacked a man in downtown Mountain View in February, reportedly pinning him to the ground and strangling him during an argument. Friday, 12:55 PM | 1 comments

California will wait until next month to implement recent masking guidance from the Centers for Disease Control and Prevention for fully vaccinated people, state officials said Monday. Tuesday, 1:21 PM

Biryaniz, an Indian restaurant in downtown Mountain View, has been temporarily shut down three times in the last three years due to pests found in the kitchen and its ingredients, according to county health inspections. Thursday, 12:55 PM | 5 comments