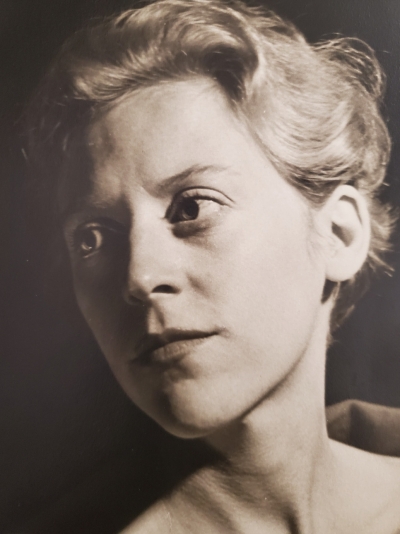 Ann Elizabeth Kane (née Andrews) was born January 30, 1925 to pre-eminent Shaker scholars and collectors Edward Deming Andrews and Faith Andrews. Along with older brother David, she grew up in Pittsfield, Massachusetts in the same house where their father was born. Ann recalled her childhood as a carefree and happy one, with most days spent playing with her best friend, Carolyn Castle. Her fondest memories were of summers at the family farm, an old Shaker farmhouse in Richmond, Mass. that her parents had bought and restored. She would swim at the quarry or huddle inside reading during the frequent late afternoon thunderstorms. After graduating high school in 1942, Ann worked at the local General Electric plant to earn money for college. The following year, when she went to the University of Wisconsin, her brother was stationed at nearby Fort McCoy during the first few months, and “kept an eye on things.” Ann graduated with a Bachelors of Science in Clinical Psychology then continued her studies at Columbia University Teacher’s College in New York, living at NYC’s renowned International House. Her time at I-House was to be a transformational experience. She became friends with students from all over the world, fascinated with the multicultural experience in which she was immersed daily. Together with this diverse group of friends, she traversed the city, often visiting the jazz clubs in Harlem. Her I-house experience would also inform her choice of husband a few years later.

The year 1950 proved a prodigious one for Ann. Soon after receiving her Master’s degree from Columbia, Ann agreed to go on a blind date with Thomas Kane, a graduate student at Columbia and émigré from Vienna, Austria. With another couple, they went to dinner and dancing at Tavern on the Green in Central Park; both Ann and Tom were immediately taken with one another and from then on spent every free moment together. By the end of December they were engaged; they were married the following June in a small church ceremony in Scarborough, NY. Their honeymoon included a long motorcycle trip in Europe with visits to the places where Tom had spent his childhood.

Back in NYC, Ann worked as a Personnel Officer for the New York Employment Department, screening applicants for state jobs, while Tom completed his PhD at Columbia. Tom then became a professor at the University of Pennsylvania, and their first child was born soon after: their daughter Linda. She was followed two years later by their son Jeffrey. After his birth Ann knew right away that something was quite wrong, though it took her doctors days to acknowledge her fears. With medical intervention, their son’s life was saved, though it would take months of testing to assess his condition, which included severe hearing loss. As she and Tom persevered through this period, Ann determined she would do whatever it took to provide the best education for their son. When information she sought proved ambiguous or inadequate, she took on the research herself. She took a correspondence course offered by the Tracy Clinic in California, and worked tirelessly with Jeffrey on learning modules they provided. The family spent a year in England, where Ann enrolled in the University of Manchester’s program for education of the deaf and earned her MS teaching credential in that field. Once back in the U.S. she continued teaching Jeffrey, as well as other deaf children whose parents sought her out.

When Tom joined the Stanford faculty in 1961, and the family moved to Palo Alto, Ann volunteered at the food Coop and taught in the new program for the deaf in the local schools. At their new home at Stanford, she designed, planted, and cultivated a truly gorgeous and bountiful garden with vegetable beds, fruit and nut trees, and flowers everywhere – climbing on trellises, lining the pathways, they proliferated seemingly unbidden.

Ann became known for her cooking – healthful and delicious meals with fresh produce she had grown. Each summer there was a flurry of pie baking, jam making, freezing and canning, the products of which were enjoyed year round. Founded on her own mother’s superb culinary skills, Ann’s repertoire as a cook steadily expanded and, to Tom’s delight, included Austrian cakes and pastries. Always a quick study, Ann could make any recipe even more delicious, and healthier besides.

Ann and Tom took every opportunity to enjoy all that their new home in California had to offer. The family spent weekends taking day trips to the coast, hiking in the foothills, and in the summer, camping all over the state. They visited often with family in LA. Ann remained close to her parents, talking to them every Sunday and taking a long trip to the East every summer. She made sure they were in turn welcomed to California during the winter.

Ever energetic, Ann’s love for the outdoors continued after her children were grown. In the winter she and Tom would go snowshoeing in the Sierras, spending the nights in primitive huts. Many summers they spent weeks at a time backpacking in the Sierras and beyond: Utah, Wyoming, Colorado, often accompanied by graduate students of Tom’s. They did long-distance hikes in the UK and Europe: along the Pennine Way in the UK over steep moors in pouring rain; across the Auvergne in France, staying in ancient villages; hiking from hut to hut in the Austrian Alps, sleeping in simple bunk-houses packed with fellow hikers. Ann, strong, rugged and ever cheerful, savored every moment.

Over the years they also explored archaeological sites around the world: Pompeii, Stonehenge, Machu Picchu, Ephesus, the Pyramids, Chichen Itza. Ann often said that archaeology was her missed calling; she would have been very skilled at it given her observational acuity, her persistence, and most especially, her nimble dexterity. Ann would describe her thrill as a child to be able to find the best-hidden four leaf clovers or the hardest-to-reach berries. As a seamstress, she could untangle any knot, coax any stuck fastening and thread the tiniest needle.

Ann and Tom planned carefully for their older age; in 2005, they moved into Vi Palo Alto. For Ann, leaving behind her beloved garden was especially difficult. Up to the last day she made sure to harvest every piece of fruit on her trees, and she made plenty of jam to take to her new home. However, the move also meant that she herself could finally and fully retire. Now she and Tom had exquisite dinners in the dining room every evening. Ann involved herself fully in the activities and programs provided at her new home, and had plenty of time for taking walks, reading and relaxing. As both Ann’s and Tom’s health began to decline – Tom‘s eyesight and mobility, Ann’s memory – they transitioned together to first Assisted Living then to Memory Care (where Tom insisted that he continue to stay with Ann). Tom passed away in February 2019, leaving Ann for a time bereft and unsettled, yet she persisted and after a time regained her good cheer, in no small part due to the unwavering support provided by her caregivers at Vi, as well as by her personal companions Norma, May Jean, Lumie and Lucie. The family wishes to express their heartfelt gratitude to all who so diligently and lovingly cared for her.

Ann will be remembered as a bright, energetic and cheerful person, always gracious and welcoming to those who visited her home, generous with her time. She was inquisitive and interested, always unfailingly modest and unprepossessing; an original who trusted her intuition – and followed it. Ann passed away peacefully in the early morning hours of June 20, 2020. She was predeceased by her brother David Andrews in 1988, husband Thomas Kane in 2019 and son Jeffrey Kane in 2014. She is survived by daughter Linda Kane, granddaughter Elisabeth Kane, as well as several nieces and nephews, their spouses and children.