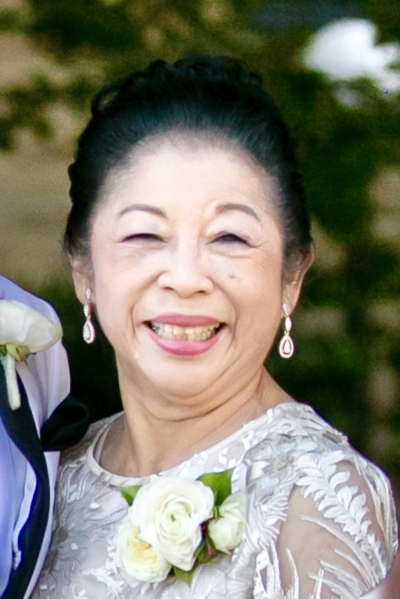 Forever in our hearts...

Barbara Jean Wong, wife, mother, grandmother, and long-time resident of Palo Alto, CA, passed away peacefully at the age 85, surrounded by her husband and two sons on April 23rd, 2021. While the sudden onset of an aggressive case of lymphoma complicated by disseminated intravascular coagulation proved a challenging fight, Barbara maintained her jovial sense of humor, grace, and elegance until her last moments.

Barbara was born in Suisun Valley, California, on January 2nd, 1936. She was the youngest of five children, two brothers and three sisters, to parents Jim and Ivy Fong. Growing up, Barbara was imbued with a creative and outgoing spirit, as well as a deep love for nature from spending time on the family's fruit farms as a child. She graduated from Armijo High School, and then attended City College of San Francisco before completing her bachelor’s degree in education at San Jose State University.

Upon graduation, she worked in Fairfield and the Santa Clara County School districts as an elementary school teacher. Later she took up an assignment teaching US military personnel children at a US base in Japan. While in Asia, she connected with distant relatives who had grown up in China and Macau, and continued to stay in close contact with them for the rest of her life. After two years abroad, Barbara returned to the Bay Area. Working in the Palo Alto Unified School District, she taught children with learning disabilities for over a decade before leaving to start her own family.

Barbara’s charisma made her larger than life, touching the lives of family and friends alike. In college, her classmates crowned her Miss Congeniality at the City College Sweet Heart Ball. She also brought great pride to her hometown when she competed as a national contestant in the Miss Chinatown USA pageant. The only thing greater than her thirst for adventure to see the world, was her devotion to her family and to helping others.

A second “mother” to so many, Barbara always welcomed family and friends to our house for social gatherings. She was always generous with her legendary homemade tapioca with pineapple chunks, almond jello fruit salad or her fabled apple strudel made out of organic apples from our own backyard. Her encyclopedic knowledge of health and natural remedies was her conduit for expressing her love and care for others, with whom she eagerly shared her secrets to beauty and longevity. And if that wasn’t enough, the sound of her melodic voice and uplifting laughter could give that extra boost to the immune system of anyone who heard it.

In 1970 she met the love of her life, Dr. Guy Y. Wong, while doing her graduate course work at the Pacific Medical College. They were married within two years, a union that would last for half a century. They raised two sons, who never once doubted that they were her greatest pride and joy for the rest of her life.

Barbara is survived by her husband, her first son Andrew, his wife Tina, and her two grandchildren, Alexander and Elyse; as well as her second son, Brian, his wife, Chaai, her granddaughter, Emerson, and another granddaughter expected in June. She will be sorely missed by her siblings Melvin Fong, Elizabeth Louie and Nira Wong and her auntie Marge, as well as the many nieces and nephews and close family friends that provided her love and support throughout her life.

Photo Gallery
0 photos Upload a photo
Remembrances
3 entries Submit a remembrance
From Benjamin Yee
May 22, 2021
Uncle Guy, I am so sorry to hear of Auntie Barbara Jean's passing. I remember as a little boy when you both were married and attending your banquet. I remember being babysat by Auntie Barbara Jean and also being watched over by her parents. My condol...
Read more
Video
Upload a video

Memorial service
Memorial services will be private.
Make a donation
In lieu of flowers, donations may be sent in her name to the following 501c3 organizations: The Chinese Historical and Cultural Project of Santa Clara County, Inc. (CHCP), PO Box 5366, San Jose, CA 95150-5366 (http://chcp.org/cah-museum/) or Morrissey-Compton Educational Center,595 Price Ave, Ste 100?Redwood City, CA 94063 (http://www.morrissey-compton.org/support.php).
About this site     Contact us