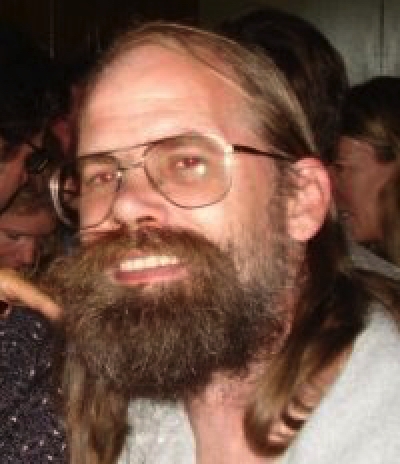 Bob, sometimes known online as “techie” or “longhairedtechie,” was much known and beloved by the many people he encountered pursuing his interests in theatrical lighting and sound, audio-visual production, computer networking, telephony, amateur radio, and photography. He was kind and generous to all, accepting of everyone and always willing to help with a technical question or task. He also always seemed to have at hand just the tool or piece of equipment needed. In later years he brought many classmates and other friends together by his active participation on Facebook.

Always his own person and technically-inclined, as early as elementary school Bob was known for running the film projectors. In high school, he was one of the most active photographers for the school newspaper and yearbook, as well as working in the school theatre. He first acquired his trademark long hair and beard during this time. His participation in Boy Scouts translated into a lifelong love of hiking and backpacking. He also worked for years at Stanford’s radio station KZSU.

Bob was a mentor to many in the South Bay theatre community, having been a fixture as a stage technician, master electrician, lighting designer, and sound designer at Palo Alto High School, West Bay Opera, TheatreWorks, Foothill College, Opera San Jose, and more, and later as an audio-visual and sound reinforcement technician at Stanford University and Santa Clara University.

At Foothill College, where he studied computer networking, he was a great resource in the networking lab, setting up labs for other students, answering their questions and checking their work.

An avid “ham,” Bob was a lifelong amateur radio operator, and a member of W6YX, Stanford’s amateur radio club. He was known widely from his participation in radio contests and online discussion groups by his callsigns KC6SXC and AF6RR, which he sported on license plates on his antenna-festooned trucks. (His earlier vehicles - an old Volvo station wagon and a vintage VW bus, were equally distinctive) During the Oakland hills fires of 1991, he helped emergency responders with communication needs.

Bob was an early adopter of the internet, having helped set up and administer some of the first IRC (Internet Relay Chat) servers at Stanford. Characteristically unique, Bob favored the operating system FreeBSD on his computers for many years.

A lifelong “deadhead,” Bob was an avid fan of the Grateful Dead and a wide range of other music with a positive message and gentle spirit that matched his own. He used to tape Dead concerts (which the band encouraged) to share with other people.

Bob is survived by his mother Barbara, brother Matt, and two nephews.

Photo Gallery
0 photos Upload a photo
Remembrances
0 entries Submit a remembrance
Memorial service
There will be a Celebration of Life for Bob at Santa Clara University (500 El Camino Real, Santa Clara), Learning Commons Viewing and Taping room A, from 6-8pm on Friday, June 7, 2019. A video stream of the event will also be available. For more information: https://www.facebook.com/events/327020704638045/
Make a donation
In memory of Bob Vaughan, you are welcome to help support the fight against cancer by a donation to the Cancer Research Institute, which funds immunotherapy research: https://www.cancerresearch.org/ For more information about Bob's struggle with cancer, see http://main.acsevents.org/goto/longhairedtechie (This page is hosted by the American Cancer Society, but we suggest donations go to the Cancer Research Institute link.)
About this site     Contact us