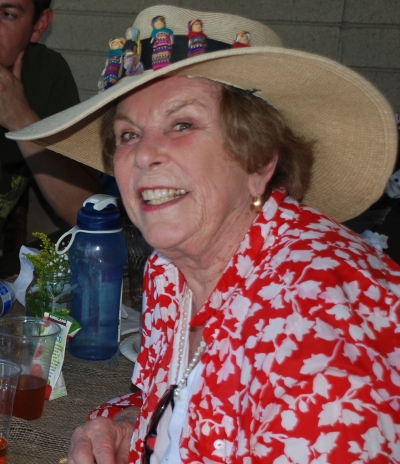 peacefully joined the angels in her home on Friday, March 15, at the age of 90. Dana was born, August 18th, 1928, in San Francisco to Ed and Elaine Turkington. Dana grew up in San Francisco, attended Miss Burkes School for Girls and graduated from Stanford University earning a BA in Education and a minor in Botany.

While at Stanford, Dana lived at Roble Hall and Story House and became a huge football fan. She was one of the original Stanford Dollies, cheering her team on to victory, and was a season ticket holder for years.

Dana became a full time home maker raising 3 children, Blair, Ward and Kendall. She also modeled for Saks 5th Ave and I Magnins, volunteered with the Junior League, the SF Symphony, Stanford Children’s Hospital and most recently, as a board member of the Merola Opera in San Francisco.

Dana was an avid Opera lover. She sponsored numerous singers, hosted events at the Menlo Circus Club, and attended rehearsals, galas and many opera events. Along with German Shepherds, (all renamed with musical names) and her 3 children, Dana loved the Opera.

Dana lived life to the fullest. She traveled the world, played dominoes weekly with all her best friends and hosted numerous college students and boarders in her Atherton home.

Dana is survived by her daughters, Blair Horner Conrad of San Carlos, Kendall Horner Hansen of Carmichael, and their spouses Mike Elderkin and Dave Hansen, 7 grandchildren and 13 great grand children. She is preceded in death by her son Warren Douglas Horner II.

Photo Gallery
0 photos Upload a photo
Remembrances
0 entries Submit a remembrance
Memorial service
An Open House Celebration of Dana's life will be held at the Atherton House May 11 from 1pm to 4pm.
Make a donation
In Dana's memory, donations may be made to Merola Opera of San Francisco.
About this site     Contact us