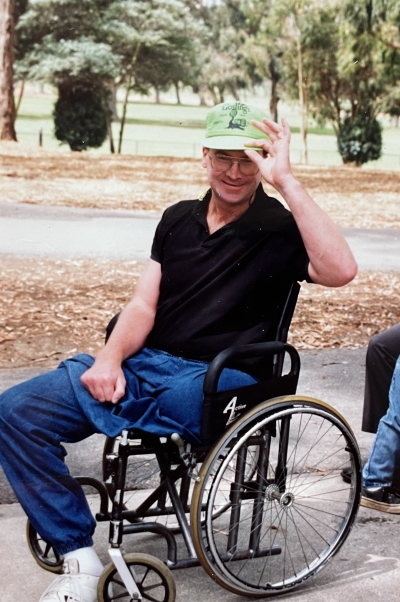 Darrell D. Dorfmeier, 70, a life-long resident of Menlo Park, died Friday, February 5th, following a brief hospitalization at Stanford Hospital, in Palo Alto. Born on 23 April 1950 in Palo Alto, California, Darrell was the youngest son of Donald and Barbara Dorfmeier who taught at Menlo-Atherton and Woodside High Schools. His mother was a beloved art teacher at Menlo Atherton High. His father was recognized as a successful football and track coach at Menlo and later served as the first boys Athletic Director at Woodside where Darrell played three years of football as a strong and aggressive lineman. Donald, who, as a prisoner of war in World War II, also survived an arduous 86-day Hunger March across Germany in the winter of 1945. Darrell’s early life was marked by tragedy with the untimely death of his mother at age 13, a serious and life-threatening motorcycle accident six years later, followed by the death of his father in 1972.

Following his motorcycle accident in 1969, Darrell was not expected to live. Yet after four months in a coma, it was clear that Darrell possessed the same tenacity as his father, Donald. Darrell reclaimed his life in spite of a year of hospitalization and a collection of severe injuries, benefiting significantly from the professionalism and expertise of the Stanford Hospital staff during his long road to recovery. Darrell’s accident also introduced him to “Mother” Helen Costello. A sister of the Religious of the Sacred Heart in Atherton, Mother Costello was central to Darrell’s life following the accident, instilling his life with unwavering faith, love, and parental support.

In 1974, Darrell had the good fortune to meet and later marry Alba Luz Fiallos Trujillo, from Tela, Honduras. Darrell and Alba were quickly married and together for over 34 years. Darrell was devoted to his large family and friends, bringing joy and laughter with him everywhere he went. Darrell loved a good belly laugh, excelled at delivering bad jokes, jumped at every opportunity to play a practical joke on friends, and relished a long and competitive round of backgammon, or “Acey-Ducey”, as he called it. After Alba’s death in 2008, Rene Reyes and Marjorie Hernandez, Darrell’s nephew and niece, were instrumental in maintaining his care. Darrell lived as independently as possible during the past many years of his life thanks to Marjorie and Rene. They ensured that the rest of Darrell’s life was filled with a wealth of love, family, and laughter. Darrell is survived by an older brother David, his two children, Don and Elene, and an abundance of extended family and friends in the Bay Area, Florida, New York, Idaho, Honduras, and beyond. He will be sorely missed in this world. Interment will be next to his wife, Alba, at the Holy Cross Cemetery in Menlo Park and service will be held graveside on Saturday Feb 13th at 10:30 am, at Holy Cross. Contributions should be directed to supporting the Stanford Hospital in Palo Alto.

Photo Gallery
0 photos Upload a photo
Remembrances
1 entry Submit a remembrance
From Mr DAVID DORFMEIER
Feb. 12, 2021
Darrell lived a life of fierce independence that could not have been possible given the collective nature of his disabilities without the life-long devotion of ‘Mother’ Costello and this wife, Alba, in addition to a host of other family and comm...
Read more
Memorial service
Socially distant service will be held at Holy Cross Cemetery in Menlo Park on Saturday Feb 13th at 10:30 am. All are welcome.
Make a donation
Contributions should be directed to supporting the Stanford Hospital in Palo Alto.
About this site     Contact us