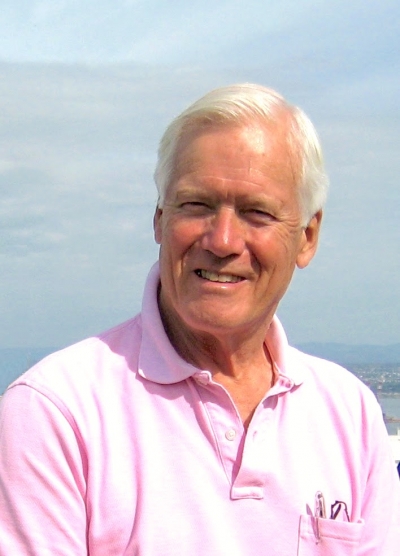 Dexter Dawes, a respected leader to local community institutions, successful investment and finance professional, and above all else, a man dedicated to his family, died peacefully on March 21 at age 84 from esophageal cancer in his Palo Alto home.

A traditional and deeply ethical man, Dexter lived with authenticity, integrity and kindness. He was affable, unsentimental, inquisitive, a risk taker, an optimist, and a skeptic. He was equally self-confident and self-effacing, and combined a sharp analytical mind with artistic creativity.

A strong believer in self reliance and responsibility, entrepreneurship came naturally to Dexter, leading to a successful career in finance. He pioneered the implementation of Employee Stock Ownership Plans in the early ‘70’s with the firm Bangert and Company, and became intent on providing employees “a piece of the action.” As a founding member of a small investment banking firm, Bangert, Dawes, Reade, Davis, and Thom, Dexter grew a successful business. Later, he headed an equity fund, John Hancock Capital Growth Management, from which he retired in 1996. His experiences with a wide range of businesses across the country gave Dexter a knowledge both deep and broad: paper products, beer distribution, photo processing, and a myriad of others.

In retirement Dexter seemed only to increase his activity, dedicating countless hours as an angel investor and as a member serving on numerous corporate and non-profit community boards. As an active investor he mentored entrepreneurs in the wide ranging fields of software, construction, and even a local bakery. Among others, corporate board assignments included Embarcadero Media Publications and Puffin Designs. Often challenging authority and assumptions, his work on the boards of Palo Alto Utilities Advisory Commission, Channing House, Foothill-DeAnza Finance and Audit and Bond Oversight Committees, Avenidas, Philharmonia Baroque Orchestra, and HeartFit for Life helped steer these organizations to sounder financial footings. In 2017, Dexter was honored with the Avenidas Lifetime Achievement Award.

In addition to his business and community engagements, Dexter also had a deep love for the arts. Starting with his high school paper, he developed a lifelong interest in photography. His practical nature and artistic creativity naturally drew him to woodworking, resulting in nearly every room of his home displaying his finely crafted furniture. At an early age, he developed a love for Baroque music. His greatest artistic accomplishment fused his dual passions when he built a harpsichord and then learned to play a Bach fugue.

A graduate of Dwight-Morrow High School, Dexter was raised in Englewood, New Jersey, but considered his family cabin in New Hampshire as the wellspring of his identity. Dexter attended Harvard College as a recipient of the prestigious Holloway Program Naval Scholarship, graduating with a BS degree in 1958. He was a member of the Hasty Pudding and DU Clubs. Dexter valued his time in the Navy and was proud to serve his country for 3 years. His tours in Asia, Europe, and South America gave him a taste for travel, and served as the basis for some of his most enduring friendships. Family legend has it that as the ship’s navigator he ran into the Bay Bridge, a radio antenna just clipping the lower deck at high tide.

Back in Cambridge after his service in 1961, Dexter married Jean Rau of Manhattan, New York. Graduating in 1963 with a Harvard MBA, Dexter, Jean and young son John headed out west to Palo Alto, where he first worked at Philco-Ford Aerospace. After sons James and Adam were born in 1966 and 1969, Dexter spent the next several years working in finance for several Bay Area firms. The family moved to their home in Palo Alto in 1973.

Dexter was always home for dinner and put family ahead of any professional ambitions. He loved to take his sons skiing and backpacking in the Sierra, where he earned his nickname “Dexter Odometer”, and was a referee for many years in AYSO. With the family he enjoyed adventure travels in Asia and Africa, and at home biking and walking in the Santa Cruz mountains. In later years, despite a battle with mobility, he continued to hike in the hills of the Peninsula, which he loved. He was always happy to have company, but equally comfortable by himself on the trail.

Partnering with his son James, he built a family retreat in the Santa Cruz Mountains, a tribute to his special bond with the New Hampshire cabin where he spent summers in his youth. While the sweeping vistas of the hills and the fog laden Pacific Ocean were ready made for relaxation, he would more likely be found mowing the meadow, cutting brush or clearing the drainage swale.

Every year saw multiple trips to experience distant lands and cultures with Jean and a cadre of close family friends, and, of course, his camera. He had a special love of the Himalayas, making multiple treks to Nepal, Tibet and Bhutan. He could recall the names of remote peaks and passes of the Dolpo and Mustang regions of Nepal long after age had deprived him of more immediate memories. He and Jean returned every year in his retirement to New Hampshire to hike Mt. Monadnock and enjoy the fall colors, and to be with extended family.

He loved reading biographies, yet thought writing his obituary was “none of his business”. He believed profits and losses were different, and did not believe in trophies for trying. He loved cars, drove fast and switched lanes often. His favorite beverage was water, and was never shy to seize upon double dessert.

His was a life well lived and savored by all who knew him. He will be missed greatly and lovingly remembered. He is survived by Jean, his wife of 59 years; sons - John, James, Adam and their spouses; 5 grandchildren - Cutter, Kalyn, William, Jae Di, Xan Di; brother Harry of Peterborough, New Hampshire and sister Augusta of San Francisco.

Photo Gallery
0 photos Upload a photo
Remembrances
0 entries Submit a remembrance
Memorial service
A memorial service will be held when large gatherings are permitted in Palo Alto.
Make a donation
Should you wish to make a donation in Dexter’s memory, please consider Avenidas, HeartFit for Life or a charity of your choice. Links: www.Avenidas.org, www.heartfitforlife.org
About this site     Contact us