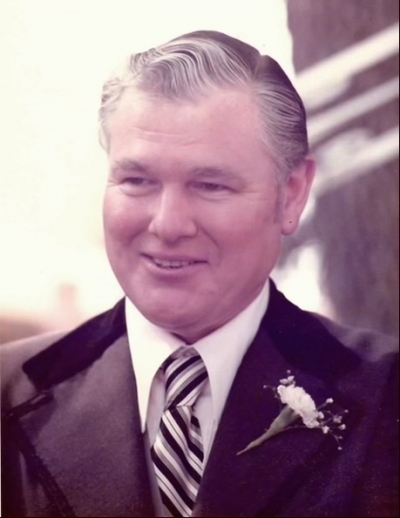 Earl Seymour Douglass, 94, a long time resident of Atherton, California passed away peacefully of natural causes on November 27, 2020 at home with his family at his bedside. Earl, commonly referred to as "Duke" by family and friends, was born in San Francisco on August 13, 1926 to Earl Sr. and Noel Douglass.

Duke was preceded in death by his loving wife of 72 years, Barbara, and brother Donn. He is survived by his daughter Christine, four sons Scott, Stuart, Alan and Mark, son-in-law Richard D’Anna, daughters-in-law Karen, Lindsay, Julie and Vicky, half brothers Bruce and Wallace, 13 grandchildren, 12 great grandchildren and numerous nieces and nephews.

Duke was born in San Francisco and would say that many of his happiest childhood memories were times spent with his grandfather, Leon Forrest Douglass, best known for his many inventions, including the Victor phonograph, the use of Technicolor in the motion picture industry and the underwater camera. These included visits to The Pocket Ranch in Sonoma and to Victoria Manor in Atherton. Duke was also a direct descendant of General Mariano Guadalupe Vallejo, a prominent figure in early California history.

Duke returned to Atherton for his high school years as a boarder at Menlo School for Boys where he made many lifelong friends and was active in the school newspaper. At age 18, along with many of his classmates, he responded to the call to serve his country and enlisted in the US Marines where he served on the U.S.S. Brooklyn in the Atlantic during WW2. It was Valentine’s Day, 1944 and he was on shore leave in New York City, where at The Stage Door Canteen he literally "fell in love at first sight" with his future bride, Barbara. With her blonde hair, brilliant blue eyes and infectious smile, he assured her marrying him and moving to California would be the best decision of her life. As all who knew them and witnessed their incredible love and devotion to one another, it was the right choice indeed.

Duke graduated from Stanford University in 1948 with a degree in Political Science. He began his career as a news reporter with The San Francisco Chronicle alongside Art Hoppe. He eventually left the news world to own and manage The Angelus, a religious bookstore in Menlo Park, California. This allowed him to be close to his favorite pastime, which was reading and writing. He had a special interest in California history and became an expert on the Vallejo family. Duke was passionate about the subject and traveled throughout the state to visit libraries where he would sit for hours and take copious notes. He eschewed the use of electronic communication and wrote all of his journals in longhand.

He and Barbara loved to travel and he devoted the same attention to detail for their travel preparations and journals as he did to his Vallejo research.

While travel was a shared favorite experience for Duke and Barbara, their true happy place was in their home of 68 years. It was here that they raised their 5 children, hosted daughter Christine’s wedding and gathered friends and family for beautiful dinner parties, casual gatherings by the pool, or cocktails on the porch. The Douglass grandchildren all share the same happy stories – learning to dive from the diving board, epic Easter Egg hunts that always ended with a piñata, and once they came of age, making Grandpa’s Christmas morning eggnog. The falling of a Heritage Oak on their home, miraculously missing both of them, did not deter them from their shared commitment to stay in their home for their lifetimes. It was meticulously restored and the annual August family gatherings and Stanford football pre-game tailgates continued.

The history of both Menlo Park and Atherton were also of great interest to Duke. His childhood time spent at Victoria Manor, now Menlo School, helped the school create and maintain many historical photos and facts about “Douglass Hall” as the beautiful stately mansion was known. When it was condemned due to seismic issues, Duke and a group of concerned citizens created “Friends of Douglass Hall” and worked with historical landmark precedents to keep the wrecking ball away. Although the name has changed, Douglass hall still stands in all its glory today, greeting all who enter the Menlo School campus.

Everyone who met Duke and Barbara were touched by their friendly and supportive personalities. In his later years, Duke enjoyed gardening at his home in Atherton and walking through Holbrook Park, where he would visit a special rose planted in memory of his wife, Barbara. He also enjoyed debating almost any topic in the news with family and friends while sipping his favorite single malt scotch.

There will be a memorial Mass for Duke at 3:30 p.m. on June 25th at the Church of the Nativity on Oak Grove Avenue in Menlo Park. In lieu of sending gifts, donations can be made in memory of Earl Douglass to the charity of your choice.