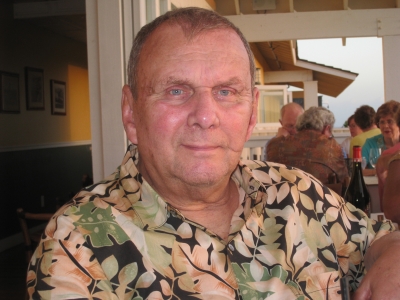 Edward Paul Brown, Ed, was a loving husband, father, grandfather, brother, and friend to many. He passed away from a heart attack October 29th at his home in Palo Alto, CA. He was just short of his 85th birthday and had fought various health issues over the past few years.

Ed was born in Akron, Ohio in 1935 to Merle and Bonnie Brown. He joined the US Navy in 1953 where he was a medic, traveling the world from Japan to San Francisco, his first introduction to California and his intent was to return to the state he loved. Upon discharge, he earned his BS in Biochemistry at Akron University and worked as a Medical Technologist at Akron City Hospital while earning his degree. There he met the love of his life, Carole, who was attending the Akron City Hospital School of Nursing. They were married in January 1960, and celebrated their 60th wedding anniversary this year.

As Ed had hoped he and Carole moved to California in 1962, with their daughter Theresa, traveling by car on USA Route 66. Their son Michael, was born in 1963. Ed worked as a lab tech in the Dept of Medicine at Stanford University before starting his long distinguished medical device career at Syva Co, a subsidiary of Syntex Corporation, in Palo Alto, and he later worked at Collagen Corp until his retirement in 2000.

During his career, Ed enjoyed frequent international travel with Carole often accompanying him. They traveled extensively and some favorite vacation destinations were Europe, South East Asia, Australia, New Zealand, Tahiti, Fiji, Kauai, and the Caribbean, as they were avid SCUBA enthusiasts. They also enjoyed visiting one of Ed’s favorite cities Salzburg, Austria, where they made many friends, and taking the family on vacations to Kauai, Hawaii.

Ed and Carole lived in Palo Alto for 55 years, where Ed enjoyed his neighborhood gatherings, maintaining their home, gardening, and weekly Friday lunch with neighborhood friends. His quick wit and sense of humor was enjoyed by many. He was an active member of Saint Thomas Aquinas Parish, as a lector, eucharistic minister, usher, and member of the Knights of Columbus. As long term patrons of the San Francisco Ballet, Ed enjoyed performances at the Opera House and dining in San Francisco.

Since becoming an Eagle Scout in Ohio, Ed had a deep love of the outdoors, spending vacations with his family camping and backpacking in the mountains, fishing, birding, and joining family Sierra Club camping trips.

Ed loved animals of all kinds. As a young man, he had numerous pets, including a red-tailed hawk, an armadillo, parakeets, a canary, and many dogs. As a family man through the years, he had many pets; the most memorable of which was Commander Sally Ride (Sally) his favorite beagle. Ed always had a supply of treats for the neighborhood dogs in the garage, who would pull on their leash when they passed, hoping to stop for a treat and pat from Ed.

Ed is survived by his wife of 60 years, Carole, his daughter Theresa Storm, grandchildren Michelle Belk and her husband Forbes, and Paul Summers. His son Michael Brown and his wife Irma, his grandchildren Michael Brown and his wife Alyson, Christian Brown, and his fiancé Bradley Fitzhenry. His sister Patricia Ward and her husband Keith, and numerous loving relatives in Ohio and Minnesota. Ed was preceded in death by his father Merle Brown, his mother Bonnie Boxler, his sister Linda Poets, and his brother Richard Brown.

You will find Ed’s spirit on the beaches in Kauai, in the gardens of Salzburg, Austria, and in the woods and lakes of the Sierras and surrounding mountains. The private funeral mass will be celebrated at Saint Thomas Aquinas Church, Palo Alto, CA. Interment will be at Alta Mesa Cemetery, Palo Alto, CA.