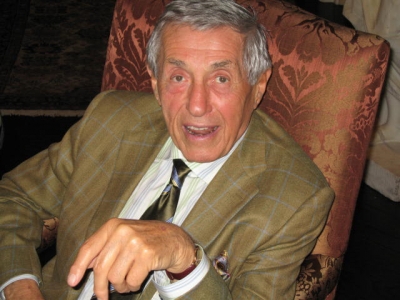 Man of mystery and ‘bon vivant’, Gary Gerard was fluent in eight languages, a gourmet and warm host, a fervent Democrat with a fierce sense of justice — a memorable man whom people met once and never forgot.

Born on May 25, 1923, as Gerhard Aufleger to Ulrich and Lotte Langmann Aufleger in Czernovitz, Romania, he was a Holocaust survivor who lost 86 family members but never talked about it. In the war years, thanks to sharp instincts, wits and language skills, he made himself invaluable to operatives who were collaborating with each other. He navigated between countries, working in and out of the system. He moved Jewish refugees out of Displaced Persons (DP) camps. At the Nuremberg Tribunals, he was called on as an astute interpreter and clearinghouse of information. Persons of note knew him as a deft difference maker. He made a conscious decision never to act like a victim; and his determined resilience to keep moving forward was an inspiration. He’d say, “There’s always time to panic later.” Under the sponsorship of the late U.S. Senator Paul Kaufman, he arrived in the USA after the war and lived in West Virginia. A research chemist, he eventually moved to San Francisco, where he met Betty Watkins, an editor at Sunset Magazine. He became a U.S. citizen, changed his name and launched into suburban life. Marriage and parenthood ensued with four children: Erica, Annie, Kitty (R.I.P.), and Steven. They chose to reside in Palo Alto because of its excellent schools, and became heavy hitters in the political scene.

In 1962, Betty and he were among key activists who founded The Committee for Green Foothills (coined by Gary) when developers threatened open space.

An expert on the manufacturing of bauxite, a component of aluminum, he was Director for the Center for Technology for Kaiser Aluminum and Steel in Pleasanton. One of Gary’s signature stories happened on a trip to Moscow with CEO Edgar Kaiser, where, by charming the hotel switchboard operator, he beat out industrialist Armand Hammer on making a cross-continental phone call. Throughout his career he continued to travel behind the Iron Curtain. After trips to Siberian oil fields, he was debriefed by the CIA.

Moonlighting, he founded “Chemical Translating Service” with Gary translating and Betty typing late into the night. Frustrated by the lack of a good Russian-English glossary of pipeline technology, he created and edited the “English Dictionary: Pipeline Technology and Transportation of Hydrocarbons,” published by Russian Business Consultants in 1994.

On weekends, after grocery shopping with the kids, he ruled Foothills Tennis Club with his powerhouse forehand, although refused to run for balls. Family vacations with Connie Crawford and her family, and Dr. Philip and Ellen Siegelman and sons Peter and Steve were an annual occasion, and that extended family continued his entire life. He loved entertaining; his refrigerator and wine closet were always stocked, and his specialty Bouillabaisse was inspired by sojourns in the South of France. Years later, he worked with The Getty Museum staff and self-published a cookbook — Cooking for Vin — of his most-requested recipes.

After he and Betty divorced, he moved to Berkeley and met landscape architect Sheila Brady. He was close to her daughters Nona and Rose, and Sheila’s granddaughter Phoebe. There, his friendship with Dr. Philip Siegelman and wife Ellen grew, and he and Phil exercised in a “Heart Healthy” YMCA class for over a decade and solved the world’s problems. Inspired by Chuck Close and Diebenkorn, Gary dabbled in oil painting gifting colorful, abstract canvases to his children and grandchildren. Tall, dark and debonair, women gravitated to him.

As his late mother Lotte Aufleger bragged, “He was once in a million.”

Photo Gallery
0 photos Upload a photo
Remembrances
0 entries Submit a remembrance
Memorial service
A Celebration of Life will be scheduled in late August. Location TBD.
Make a donation
Contributions in his name can be made to The Committee for Green Foothills, at greenfoothills.org or mailed to 3921 East Bayshore Road, Palo Alto, CA 94303.
About this site     Contact us