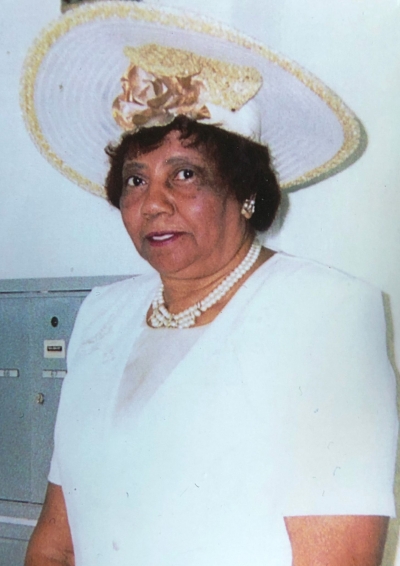 Genevieve Holland was born October 24, 1934 in Ville Platte, Louisiana, to Milton Holland and Hattie (Celestine) Holland. She was affectionately known by her family and friends as Gen or Aunt Gen. At 19 years old, she met Audrus (Poncho) Edwards on the church steps of St. Matthew Baptist Church. Three months later they were married and from their union they had five daughters. September 16, 1965, they relocated their family to East Palo Alto, California. Shortly after as a family they joined Mount Olive Baptist Church. Genevieve was employed as a domestic housekeeper for many years. She later became a restaurant owner in Seaside, California, where she served many of her signature Creole dishes. Later, she married Hezikiah Price. Genevieve enjoyed playing bingo, pity pat, reading the Bible, singing in the choir, and working on the funeral committee at Mount Olive Baptist church where she was a member for over 50 years. She enjoyed crocheting table doilies, baking her famous Sweet potato pies, and sharing a meal with family and friends during the holidays. She was preceded in death by her daughter Ella Edwards; first husband Audrus Edwards; and second husband Hezikiah Price. She leaves to mourn her children, Judy Brown (Terral) of East Palo Alto; Jane Theresa Jones of East Palo Alto; Lucy Mae Edwards of Stockton; and Joella Cusic (David) of Stockton. Genevieve also leaves behind her grandchildren Nekeisha Ray-Pieper, Jeannique McGlothen, Alexandria Jones, Bennie Jones III, Travon Keith, and nine great-grandchildren, four sisters, one brother, and a host of nieces, nephews, many other relatives and dear friends.

Photo Gallery
0 photos Upload a photo
Remembrances
1 entry Submit a remembrance
From Vernita Wilson
May 23, 2019
Our sincerest condolences to you and your family on the loss of your Mother! We will always remember that unforgetable Laugh and Love she shared with all!! May She Rest in Heaven!! The Wilson Family
Memorial service
Quiet Hour “viewing” – Thursday May 23, 2019, 3 pm – 7 pm at Jones Mortuary Chapel, 660 Donohoe St., East Palo Alto, CA 94303 Celebration of Life-Home going services will be Friday May 24, 2019, 11:00 a.m. – Skylawn, Highway 92 at Skyline Blvd., San Mateo, Ca 94402 1:00 p.m. - Mt. Olive Baptist Church, 1982 Pulgas Ave., East Palo Alto, CA 94303
Make a donation
If you are unable to be physically present at the services, but would like to contribute in some way, you can send a floral arrangement to Jones Mortuary or donate to Canopy.org to have a tree planted in mom's name. Again, thank you for your love and prayers during this time.
About this site     Contact us