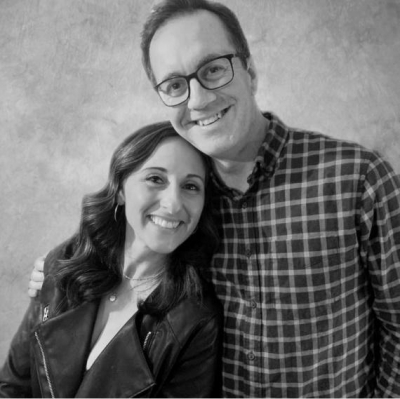 Known affectionately by friends and family as “The G’s” or “The G-Unit” Greg and Grace were meant for each other. Greg was enthusiastic, outgoing with a life-long love of music. Grace had a curious mind and resilient spirit. She was humble about her success—instead she lifted others up with her positive energy. They were the perfect couple and perfect parents to Olivia and Madison, their seven-year-old twins.

Greg (C1996) and Grace (C1998) met at Palo Alto High School but didn’t date until they reunited at a Giants game in 2004. They married in 2009 and settled in Redwood City and then San Carlos becoming parents in 2015. This year Grace signed up to be room parent for Olivia’s 2nd grade class, Greg was room parent for Madison’s. The family baked together, cheered at the girl’s soccer games and enjoyed the outdoors—camping, hiking, biking. They were open minded, kindhearted, genuine, and fun loving.

Greg was born in San Francisco on June 28, 1978. In his youth he was enthusiastic about Boy Scouts, backpacking, cars and playing percussion in the El Camino Youth Symphony. His love of music led him to earn a BA degree in Sound Arts from SAE Expression College, Emeryville, CA. He used his creativity and leadership skills as an Engineering Manager, CET QA, at Dolby Laboratories. Friends say he was a master mixologist and could make a mean Manhattan. Greg loved the outdoors, biking, hiking and camping, all of which he shared with Grace and his girls. He quietly led by example and was always there for friends and family.

On March 23, 1980, Grace was born in Palo Alto as Liza’s younger sister. She enjoyed piano, ballet, dancing, karate, soccer, and traveling. When Grace put her mind to something, she would reach it regardless of the obstacles. This quality was needed in 1998 when she survived a life-threatening car crash making her more determined to love life, her family, friends and colleagues. She earned a BA at UC Davis, and later an MBA from Columbia University and UC Berkeley while working at Gap. In October Grace received a promotion at Google, where she worked for the past 8 years, becoming Head of New Service Introduction. She is remembered for her trademark smile, positive outlook and respect for others.

The G’s were inseparable in life, and now in death as a result of a tragic collision in Redwood City on November 4, 2022. Their death is deeply felt by family and friends. They are survived by their children Olivia and Madison. Greg by his parents Chris and Adrienne Felciano Ammen and brother Michael. Grace, by her mother Nana Spiridon and sister Liza. She was predeceased by her father Alex.

Photo Gallery
0 photos Upload a photo
Remembrances
0 entries Submit a remembrance
Memorial service
Private services will be held at Alta Mesa Memorial Park. A Celebration of Life is open to all at Palo Alto High School, Peery Family Center Gym on December 3, 2022 2pm. More detail here: https://sites.google.com/view/graceandgreg/home?pli=1
Make a donation
A GoFundMe site was opened to support the twins and family with immediate and long-term needs https://gofund.me/c69424f3. Many have been generous. The families wish to share their gratitude for these donations.
About this site     Contact us