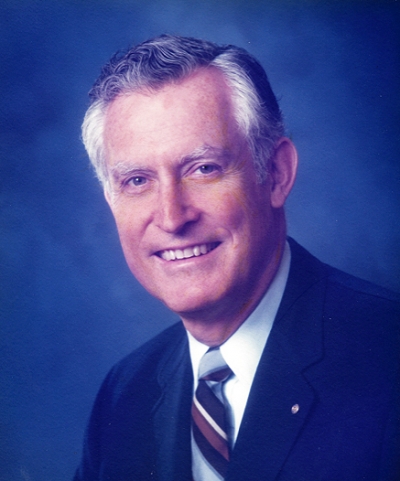 Skip Hoyt passed away peacefully at his home in Walnut Creek on March 11, 2021 at age 92. He is survived by his wife, Sue; brothers Bill and Larry; children, David Hoyt, Barbara Karlin, and Stephen Hoyt and their spouses; stepsons Michael, Matthew, Mark, and Mitchell McAlister and their spouses; thirteen grandchildren; and three great-grandchildren.

Skip grew up in Pasadena, California. He received an AB in Economics (1949) and an MBA (1951) from Stanford University. He was an avid sports fan, and his time on the football team made him a lifelong, loyal supporter of his beloved Cardinal. In 1950, Skip married fellow Stanford student Jean Meyn, with whom he had three children.

Skip spent over thirty-five years at IBM, where he held several management roles, including marketing branch manager and manager of management development. He was a proud IBMer, and loved to share stories of his time there. After retiring from IBM, he started a management consulting practice and lectured at the University of Southern California.

After Jean’s death in 1991, Skip moved to Palo Alto, where he married Sue McAlister. Skip and Sue moved to Rossmoor in 2009, where he found joy in the beauty of nature, and especially loved watching the birds that visited their garden.

A gifted pianist, Skip’s clear tenor voice and upbeat arrangements of Christmas carols, patriotic songs, and musical standards brought joy to his family and the many groups for which he played. He played the piano daily until shortly before his death.

Skip was an active member of the Economic Round Table, Civil War Roundtable, Great War Society, Palo Alto Club, Executive Service Corps, his church, and a dedicated Rotarian for over 70 years, never missing a meeting, and visiting local chapters when travelling.

Skip was a positive, caring, and ethical man who always carried his Purpose Statement in his wallet. He leaves a legacy of kindness, compassion and grace. Skip will be greatly missed, but lovingly remembered by his family and many friends. The family appreciates the support of Carol Frankenfield and Hillendale Home Care as well as all the other excellent caregivers during his final years.