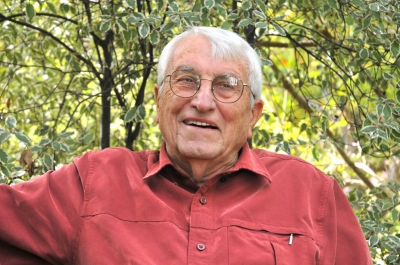 John W. Harbaugh a longtime resident of Stanford, CA, died peacefully from natural causes on July 28, 2019, in Santa Barbara, CA where he resided in an assisted living facility prior to his passing. John was professor emeritus of Geological and Environmental Sciences at Stanford since 1999. He started his academic career at Stanford in 1955 and served as Department Chair in the late 1960’s. He taught in several departments within the School of Earth Sciences. A significant portion of his career was dedicated to the development of applied computational methods in geology.

John, the eldest of five children, was born August 6, 1926 in Madison, WI. His father, an economic geologist, and his mother, originally trained as a landscape architect, created a nurturing environment for their family. John attributed much of their influences in encouraging him to explore both the imaginative and natural worlds while living in small midwestern towns in northeastern Oklahoma in early childhood, and later during adolescence, in Hudson, OH, a suburb of Cleveland.

John graduated from high school in 1944, at the top of his class, and then enlisted in the V-12 Navy College Training Program as WWII was winding down. After a year at Denison University in Ohio, John transferred to the University of Kansas where he completed his undergraduate degree (BS) in geology in 1948. In 1950, he received his Master’s Degree from Kansas, as well, and he has maintained a close relationship with the University for many years. Afterwards, John spent the next five years traveling extensively in the Midwest and Rocky Mountain area while working for the United States Geological Survey and the Carter Oil Company. During this time he was introduced to Josephine Taylor, a resident of a small town in northeastern Oklahoma, near where John had grown up. After courting for several years and following Josephine’s receipt of an undergraduate degree from the University of Oklahoma, they married in 1951.

In 1955, John completed his PhD at the University of Wisconsin in geology and was offered a faculty position at Stanford University. John moved his young family to a home on the Stanford campus, where he was to remain for some 62 years.

John was instrumental in the creation of the Geomathematics program at Stanford. John went on to become a founding member of the International Association of Mathematical Geology and received the association’s Krumbein Medal in 1986. John mentored over 40 master and PhD students and wrote over a dozen textbooks. He acted as Stanford’s NCAA Faculty Athletic Representative for 12 years, starting in 1969 and interfaced with many luminaries in the then PAC-8 conference. His tenure was during an exciting epoch in College Athletics when rapid changes were occurring, such as the Title IX amendment, which paved the way for greater gender equity in college sports.

In addition, among several joint efforts in academia, he pursued collaborative studies with archeologists using geology to assist in interpreting archeological excavations, as well as with botanists, in attempts to address how the distribution of plants reflects the geochemistry of underlying rocks. He testified before a congressional subcommittee in Washington, DC about the wisdom of storing radioactive wastes underground, where he emphasized due caution.

After retirement, he spent much of his time traveling, building wood furniture, and cultivated his Tudor style home, which is listed among the historic homes of the Stanford campus. He developed far-reaching friends throughout the world and shaped the lives of many with whom he interacted. He will be remembered as a man of equanimity, humor, fairness and integrity.

Photo Gallery
0 photos Upload a photo
Remembrances
0 entries Submit a remembrance
Memorial service
A Memorial Service will take place at the Stanford Memorial Church, Thursday, November 14th, 2019 at 2:30 PM.
Make a donation
John’s family would like to thank Heritage House Assisted Living, Santa Barbara, CA for their exemplary care and professionalism as well as Assisted Hospice for their dedication and service. Remembrances can be made to environmental non-profit organizations (e.g. Peninsula Open Space Trust) or to educational institutions (e.g. Stanford, University of Kansas or University of Wisconsin general education fund).
About this site     Contact us