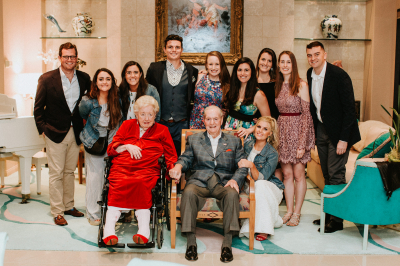 Jack McGraw epitomized the phrase Jack of all trades. A husband, a father, a friend, an entrepreneur, a businessman, a devout Catholic, a grandfather, and a great-grandfather, Jack wore many hats throughout his life as the patriarch of the ever-expanding McGraw family. Forever the loudest voice in any room with a sneeze that would have you running for cover, Jack’s presence was always known…and a hanky always handy. He had a zest for life that was perpetually on display, especially when cheering on Creighton basketball, singing church hymns a few octaves above everyone else, or yelling at one of the grandkids to “pipe down” during one of their bi-weekly treks to Baskin Robbins. Jack had a hard-earned suit for every occasion and single-handedly kept the sock garter industry in business. The man was as dapper as they come, never missing an excuse to dress up and celebrate life.

Jack passed away peacefully on Monday, August 1st after deciding it was time to join his beloved bride of 61 years, Joan, in heaven – nearly 6 months without her was simply too long. Born in Kansas City, Missouri, Jack spent most of his formative years in Omaha, Nebraska, where he grew into a corn-fed, Midwest-bred bruiser. He was an all-star football and baseball player and let that competitive drive propel him to success in the business world after completing a stint in the Army. Ever hear about the time he was stationed in Fairbanks, Alaska? Yeah, we have too.

Jack moved on to make a name for himself in the Bay Area and, there, he reconnected with a blonde-haired beauty named Joan Davey. We know how that story goes and the two soulmates took on the world hand in manicured hand as they started a family, a company, and a life. A pioneer in his day, Jack was inducted into the Insurance Hall of Fame by Insurance Business America magazine in 2017 celebrating his seven decades of leadership spent in the industry. Jack was a proud member of the Boys Town Board of Trustees, an initiative that provides love, support, and education to at-risk children, as well as a Knight of Malta. He was a leader and an advocate for those who could not advocate for themselves and devoted himself to his faith wholeheartedly and without expectation of anything in return. The awards, accolades, and initiatives this man received and were involved with are more extensive than this word count allows and, frankly, if we told you all of them, you might start to question your own level of altruism.

Jack’s generosity knew no limits. He gave and he gave and he gave some more. From being flagrantly fleeced by his own grandchildren after they discovered he would pay obscene amounts for meaningless chores to walking around Menlo Park with a pocket full of cash just to hand out to the homeless, Jack was a modern-day Willy Wonka - house full of sweets and all. He was about as close to a saint as they come, except for that one time Joan caught him spitting his cigar bits out on their expensive oriental rug, but he has since served his penance.

Above all else, though, Jack was the quintessential family man. He loved his people more than anything else. He loved bringing everyone together. He loved the chaos and the crazy. He loved Nat King Cole, after dinner shots of Irish Mist, chewing cigars, and pocket squares. He loved Rocky Road Ice Cream with marshmallow sauce and jelly-filled donuts. And he absolutely loved sneaking a treat or two to the grandchildren (and the dogs) despite their parents’ best efforts.

So, how do you sum up the contagious effervescence of Jack McGraw? Well, you don’t. You can’t. There are simply not enough words in the dictionary to bring to life the legacy Jack leaves behind as he departs this life and strolls into the next, no doubt in shiny loafers and an impeccably tailored suit. Jack, we hope you are finally getting to have that stiff drink with Joan, preferably a Manhattan for her and a perfect Rob Roy for you. And we know you are already getting on Jane’s nerves – but that she is surely happy to see her twin brother again.