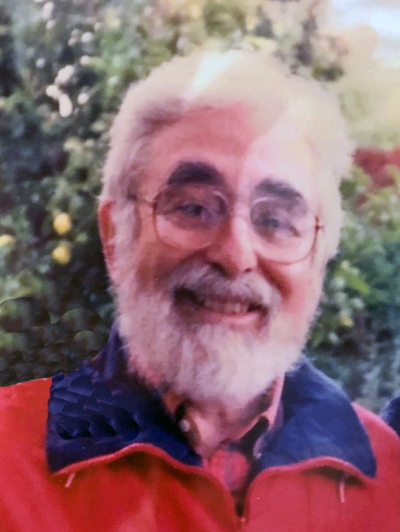 Joe Mandell was born across the street from his future wife, Marion Bruskin, in New Brunswick, New Jersey. They attended the same junior high and high school and university. (Joe was well known for arguing with the high school chemistry teacher, and he was usually right!) He and Marion became a couple during college at Rutgers and married in 1951 after she finished her BA and Joe completed his Masters. They moved to Pasadena where Joe earned his doctorate in microbiology at Cal Tech. Joe studied viruses with Linus Pauling, and Marion worked to put him through graduate school.

After Joe finished his PhD, the couple moved to Long Island, NY where he had a post-doc fellowship and his first two children, Linnea and Douglas were born. In 1958, when Douglas was three months old, they moved to Palo Alto for Joe to take a research position at Stanford Research Institute. Dana, their third child, was born in 1960, the year they bought a house on Parkside Drive in the Greenmeadow neighborhood, which is still the family home.

After years of research, Joe decided to switch to teaching. He became chair of the Biology Department at University of Santa Clara where he taught microbiology, biology, and genetics and was required to dress very conservatively. Then Joe moved to West Valley College and taught biology, microbiology, and chemistry. In this informal environment of the 60s and 70s, Joe grew long hair and wore a leather headband. He was beloved by his students who thought he was a “really cool” professor.

Joe was known for making his classes especially fun. He liked to include science jokes at the ends of his exams, and the sound of giggles would let him know when a student had reached the end of a test. His microbiology labs included food applications like making sourdough starter, yogurt, and beer.

Joe was an avid folk dancer and teacher, and, along with Marion, ran a children’s folk dance club at Ohlone school that attracted 50–60 children per night. Joe volunteered in the schools, teaching science and assisting music teachers by tuning instruments and coaching children. He was an active volunteer with the Friends of the Palo Alto Library and also served on the board of the Mendocino Wooodlands Camp Association. After retirement, Joe fulfilled a lifetime dream of learning to play violin, playing for 15 years with the South Bay Community Orchestra and attending music camp every summer.

Joe enjoyed woodworking, and made some of the furniture that is still in the family home. He also built the counter for the ice cream store now known as Rick’s Rather Rich. He was paid in ice cream, so for much of Linnea, Douglas, and Dana’s childhood, there was a continuous supply of delicious ice cream! A dedicated mycologist, Joe was president of the San Francisco Mycological Society for two years, and started a small commercial mushroom farm. He served as a mushroom expert for the poison control center, assisting when someone’s child or pet ate an unidentified mushroom.

Years ago, when Joe admired a carved wooden frog, his friends assumed he especially liked frogs and gave him all kinds of frog-related items, starting what eventually became a family tradition. He also loved going to Saturday yard sales and eating breakfast every Sunday at Hobees where, like on Cheers, everyone knew his name.

Joe loved gardening, but had an ongoing struggle with the large population of ever-hungry Greenmeadow squirrels. He eventually took to trapping and relocating them at Baylands Park. He even kept a log of the “rehomed” squirrels, counting over 100 in a year! Joe also discovered that the squirrels learned about accessing his tomatoes from each other, and by relocating those with “tomato training” he was able to reduce the number of tomatoes that disappeared.

Joe was always known for his kindness, cheer, and warmheartedness. He was quick with a joke and everyone enjoyed his intelligent and interesting conversations. He will be fondly remembered by all who knew him.

The Mandells would like to encourage everyone to contribute stories, photos and memories to an online memorial at joseph-mandell.forevermissed.com

Photo Gallery
0 photos Upload a photo
Remembrances
1 entry Submit a remembrance
From Joyce Selby
March 5, 2021
To: Marion and Family, Joe was my partner in the South Bay Community Orchestra for quite a few years. He was always so supportive and kind. He shared his Klezmer music with me which was a joy to play. I am so happy he was a part of my musica...
Read more
About this site     Contact us