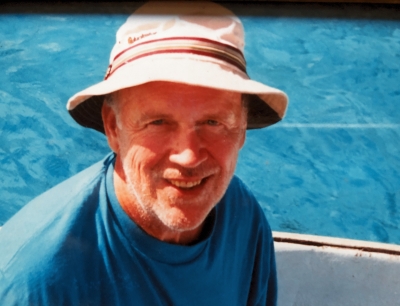 Joseph Fowler Pickering, 93, passed away peacefully surrounded by family members on March 26 in Ojai, CA, where he had moved last year to be closer to family after residing in Palo Alto for 76 years. Joe successfully ran insurance businesses for 65 years and was a leader and participant in many community organizing activities in the Santa Clara Valley.

He was an above average water skier and still playing tennis in his 90s. He was a world traveler who especially loved to scuba dive in tropical oceans and explore all their living creatures. Joe loved a good meal (any meal really), a glass of red wine, and conversation with friends. He was an immensely loving and supportive husband, a wonderful (and understanding) father, a welcoming father-in-law, and an always attentive grandfather. He was fun and funny, well read and smart, charming, courageous, loyal, exceedingly kind, and friend of countless individuals from different walks of life and spanning many generations. He led a long and good life, and will be greatly missed by many.

In a memoir he wrote for family he described his experience: “My first view of Stanford was a dramatic one driving down Palm Drive on the day I enrolled. The emotional impact was so overwhelming that I couldn’t eat, which had never happened before and seldom since. It was the beginning of a relationship that provided the framework for the balance of my life. Stanford is where I went from boyhood to manhood, where I was educated, where my core philosophy developed, where I fell in love, and the source of my closest friends. I am forever grateful.”

Joe wrote that “the most important event in my life occurred” when in February 1947 he met fellow Stanford student Helen Amelia Dietz on a blind date. Joe and Helen were married Sept 5, 1948 in Reno, not in one of Reno’s “wedding chapels” but in a Congregational Church with a big party later at the Dietz family home. Helen, with a degree in journalism, went to work for the Dean of the Journalism School while Joe earned an MBA at Stanford Graduate School of Business.

After graduation and two years at Varian, one of the first electronics companies in what was to become known as Silicon Valley, Joe began selling life insurance, a business in which he could be his own boss, have no limit on earnings, and no capital needed. It was the career he was looking for. Joe and Helen gave birth to Amelia Storrs (Mimi) in 1952 and Joseph Fowler II in 1953.

They then moved from their Barron Park home to the new Greenmeadow Eichler subdivision where Julia Helen was born in 1955.

When Joe married Helen, he also married into Echo Lake, two lakes nestled in the majestic Sierra Nevada Mountains at the summit above Lake Tahoe, and a community of adventurous, somewhat quirky cabin owners. From that point on, Helen spent every summer at the lake, as did Mimi, Joe and Julie from infancy until college age. Throughout the summer he would make the 4-hour drive to Echo on Fridays and then leave on Sunday evening for work on Monday. In more recent times, he ferried grandkids to and from the lake – their job was to keep the driver awake! In 2021, Joe formally passed the cabin on to Julie whose family are committed Echo Lakers and will give the cabin the tender loving care it needs.

The 1960s were a time of social, political and personal change, as well as tumult nationally, especially at Bay Area college campuses, and even at Cubberley High School where Mimi and Joe II attended. A series of racial incidents at Cubberley High School in 1968 led to strikes by African American students, who attended through an exchange program with East Palo Alto, as well as by members of a group called the United Students Movement.

Joe II’s involvement and a strong sense of justice propelled Joe into a leadership role among parents defending striking students. Tensions rose and protests were ignited when the Palo Alto School District decided in March 1969 to terminate Ron Jones, a popular and innovative teacher, for very flimsy reasons. Joe was one of Ron’s strongest supporters, presenting polling evidence in favor of keeping the teacher to a school board hearing and making the opening remarks at a gathering of over 500 students and parents at a specially called school board meeting. Despite the show of support from students, parents and some teachers, the School Board continued with the dismissal. Ron went on to teach at SF State and his book about his classroom experience, “The Third Wave,” was made into documentaries and television dramas.

These experiences propelled Joe into a run for the Palo Alto School Board in 1971 as the candidate endorsed by the Citizens Caucus, a group that came together to provide an organized, liberal voice in school board elections. It proved to be a very negative campaign with redbaiting and personal attacks on Joe, and not surprisingly the conservative, establishment candidate won.

Joe was seriously disappointed but over the next few years he saw many of the “radical” ideas in his platform adopted by the school system. It also led to the next chapter in his civic life as one of the leaders of a Saul Alinsky/Industrial Areas Foundation style organizing effort to build coalitions to address increasing disenfranchisement of middle class communities in Santa Clara Valley. The coalition successfully defeated a proposed sports arena that unbeknownst to many residents would have cost taxpayers a significant amount.

Clearly the most devastating development in Joe and Helen’s life was the death of son Joe in 1992 at the age of 39. An industrial worker and a radical from the time he left high school, Joe had changed course, received a Master’s degree in Education from Stanford and began teaching at Menlo Atherton High School when he was diagnosed with soft-tissue sarcoma, no doubt due to dioxin exposure while previously working in a chemical plant.

Joe was fun loving and adventurous. His rabble rousing did not stop him from selling a lot of insurance, which qualified him for free trips to various conventions. He turned a “Million Dollar Round Table” convention in Boston in 1966 into the family’s first big vacation: seeing historic sites in Boston, Lexington & Concord; to D.C. and Colonial Williamsburg; visits with old family friends in Maine, Chicago and St. Louis; and a canoe trip on a hot and very slow-moving Comfort River in the Ozarks. Joe’s last trip abroad came in 2007, when he and Helen rented a villa near Orvieto, Italy and invited all the kids and grandkids to come and stay for as long as they could, and come they did for a wonderful family gathering with side trips throughout Italy.

Joe loved warm waters, scuba diving, and exploring the ocean and all the wonderful creatures to be found in the tropical seas. When vacationing in Hawai’i and touring the Big Island Joe and Helen fell in love with a little A-Frame jutting into Puako Bay on the Kona Coast. They bought Hale Puako in 1977 and spent several months there every year. For many years they enjoyed sparkling days and island adventures, rum punch evenings with Mainland guests and Island friends, and moonlight nights with the sound of waves lapping on the lava rocks.

Following their wishes, Joe and Helen’s ashes will be spread by family at Echo Lake and Puako Bay.