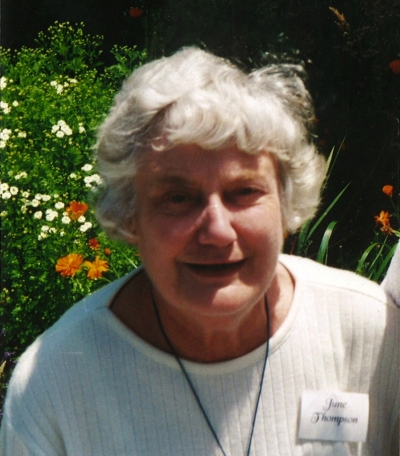 She received her B.A. from the University of Michigan in 1947 and then moved to New York City, where she wrote advertising copy for Henry Holt and Co., 1947-1950. She earned her M.A. in Early Childhood Education from Columbia University in 1951.

She first taught in Bellflower, Calif., then in Palo Alto, from 1953-1970. She spent her sabbatical year in London, 1962-1963, studying at the Montessori Training Organization and the St. Nicholas Training Centre.

She earned an additional Montessori diploma from the College of Notre Dame in 1966 while directing a pilot program under its auspices for children of diverse backgrounds that led to a permanent Montessori school.

She then moved to Alaska to become founding director of the Fairbanks Montessori School, one of her happiest years of teaching. Two severe injuries impelled her to return to Ohlone School in Palo Alto, where she met her lifelong partner, Bill Thompson. They were married in 1970. They shared many concerns and commitments, and he always made her laugh.

She is survived by her stepchildren Christopher Thompson, his wife, Toni, and their children Xochitl Andrade, Christopher Jr., and Daniel; Cynthia Wise, her husband, Larry, and their daughter, Nicole; Scott Thompson and David Thompson.

Her sister, Justine Merritt of Eugene Ore., died in 2009 at the age of 84. She and her husband, Glenn Merritt of Homewood IL, had five children: Stephen, Regna, Gail, Ann, and Susan, all now married with children. Her younger brother, Roy Miller Jr., and his wife, Gabriella Carella Miller, were parents of Guila Brooks and Paul Miller. Her parents were Roy A. Miller, captain and master pilot on the Mississippi, and Lucile Miller, teacher and lifelong volunteer and social activist.

June had a deep love of the natural world and an equal passion for the arts. She was a docent at the Stanford Museum 1971-1975, specializing in the Rodin collection. She served as curator of the permanent art collection of the City of Palo Alto through the Cultural Center. She volunteered at Penny PattersonÕs Gorilla Foundation and had a memorable visit with Koko.

In 1980, she decided it was time to come to terms with living in the nuclear age, and with her usual zest, embarked on research and study that continued to her death. Her first action was at Vandenberg Air Force Base in 1983, protesting the MX missile. In June of that same year, she was arrested at Livermore Lab and held for 11 days.

In 1982, Justine Merritt envisioned the "Ribbon Around the Pentagon" using 18" x 36" panels to depict "what I cannot bear to think of as lost forever in a nuclear war." The response was so immediate and widespread that the ribbon ultimately tied the Pentagon to the Capitol, a distance of seventeen miles.

June and Bill held many workshops and mounted a large number of exhibits until the scheduled event in Washington DC in 1985. They handled beautiful panels from Humboldt County before they ever dreamed of moving here, and she was overjoyed to finally meet the artists.

In August of 1985, they joined a Fellowship of Reconciliation tour to Japan to participate in the World Congress Against A-bombs and H-bombs in Hiroshima and Nagasaki. She and Bill also represented the Ribbon at the unfurling of the Japanese version, which was wrapped around the A-bomb dome to commemorate the 40th anniversary of first use of nuclear weapons.

In 1986, she joined the Great Peace March for Global Nuclear Disarmament to Washington DC; Cape Canaveral to protest the Trident missile, several times at the Nevada Test Site, and many times at Livermore Lab, leading to further jail time.

She also went to Whiteman AFB in Missouri in 1991. She expected six months in jail for kneeling on a missile silo lid, but President Bush had just taken the missiles off alert, so she was simply released with a Ban-and-Bar letter. Her last action was at White Sands NM in 1995 commemorating the 50th anniversary of the first nuclear bomb test. After moving to Bayside in 1989, she and Bill formed the Jacoby Creek Land Trust (JCLT) to accept conservation easements, theirs being the first. Since then, the JCLT has acquired many holdings to protect the watershed. When Bill became Director of Veterans for Peace, Humboldt Bay Chapter 56, in 1992, June worked diligently to spread information about the nuclear threat. She ceased being an active member in her later years, but continued to write and speak on the subject. Some of her experiences are recorded in her book, Missouri Mandala: Observations of an Anti-Nuclear Activist.

Photo Gallery
0 photos Upload a photo
Remembrances
2 entries Submit a remembrance
From Elizabeth Fairchild
June 29, 2013
I remember June and Bill as members of my neighborhood in Peace City on The Great Peace March. They were two of the first people I met and were kind and knowledgeable. I am glad to have known them both. My condolences to the family.
Memorial service
A memorial service will be held at the Humboldt Unitarian Universalist Fellowship off Jacoby Creek Road in Bayside on Saturday, June 1 at 2 p.m.
Make a donation
Memorial contributions may be made to the Jacoby Creek Land Trust Stewardship Fund c/o Humboldt Area Foundation, P.O. Box 99, Bayside CA 95524, or an organization of your own choosing.
About this site     Contact us