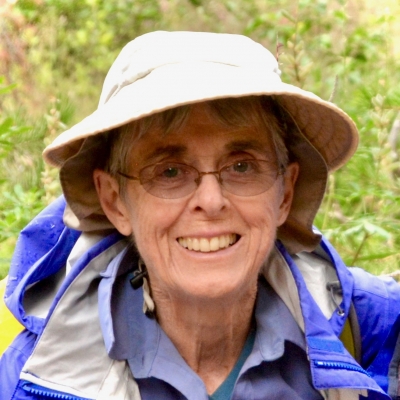 Kathie Underdal took flight in the twilight hours of November 12th when the silver light of the full moon was shining over Hidden Villa and the great star butterfly was soaring across the night sky. In our imaginations she leapt right up into that light, radiating her love down on us as she nimbly trotted across the mountains she so loved.

Born November 4, 1943, Kathie grew up by the sea in La Jolla, California with her parents (Margy and Gordie Langsdorf) and two brothers (Rob and Larry). Like her mother she was known for her adventurous spirit and expansive curiosity. She explored the then-open hills around their home on her bicycle, spelunked through the tide-pools, being careful of eel bites and crab claws, and was known to have caught more than one garter snake by hand during the family’s yearly Sierra Club pack trips into the mountains (a skill that greatly impressed her 3rd grade students many years later). Kathie followed family tradition and attended Pomona College where her grandfather had been head of the music department for 30 years. There she sang in the Glee Club choir, made life-long friends with many fellow “sage hens” and majored in History.

Venturing to the East Coast after graduation she met a handsome, kind young man over the apartment trash cans one evening and learned that he, too, was studying to become a teacher. She put him through many trials, including snowshoeing through Cambridge during snow days and getting up early to watch the warblers arrive at the St. Auburn Cemetery. Unfortunately, once concluding that Jerry Underdal would be a wonderful partner for life’s adventures, life whisked him off to Vietnam to volunteer as an English teacher near the war zone. Snail mail communications were indeed sluggish, with exciting stories, romantic words and once even a (rather rotten) moon cake taking quite some time to travel between continents. After two years of writing back and forth they decided to marry so that Kathie could join Jerry in Vietnam.

However, in the time it took for Jerry to return home, meet Kathie’s family in California, get married and honeymoon on a long backpacking trip through the Sierras, the war in Vietnam had worsened and they decided that spending their first year of marriage there was inadvisable. Their adventurous spirit was not to be thwarted though. After a few years of teaching on the East Coast they signed up with Volunteers in Asia and headed off to Sulawesi, Indonesia to support the English department at the teachers’ college there.

Returning to California in 1975, they settled in Palo Alto, where they became long-term residents. In 1976 Kathie and Jerry were delighted to welcome their daughter Kristina into their lives. For several years Kathie taught English as a second language in San Jose and Berkeley before turning to teaching elementary school in Palo Alto. As a parent and a teacher, she was known for her masterful skill at meeting each child at their level, for her deep commitment, immense creativity and abundant sense of curiosity. Walking into her classroom you might have found a mini-zoo lined up on the back shelves with newts, spiders, garter snakes or tadpoles in the middle of their metamorphosis. You might have found children polishing carefully formed Hopi pots, crafting poetry for an upcoming Parents’ Night or in costumes practicing Charlotte’s Web. At home you never knew when you might find a deer skeleton being bleached by the sun on the roof, a bird wing in the freezer (for dissection later on) or freshly found owl pellets drying in the oven (for scientific study at school).

While parenting and teaching, Kathie managed to do a great many other things as well. She took a course on teaching English through Drama in Israel and finished her Masters Degree in English at SFSU. She joined the Peninsula Women’s Chorus, going to practice every Monday night for over twenty years and embarking on musical adventures in the summers to places like London, Hawaii, Estonia and the Southwest. With Jerry, she led two Fulbright study tours for teachers, one to Singapore and Indonesia and another later on to Vietnam. At home, she worked passionately to cultivate a nourishing home garden and spearheaded frequent camping and backpacking adventures.

Kathie was a deeply supportive mother. When Kristina was a child, Kathie encouraged her love of nature and writing. She modeled how to show-up as a strong, confident, adventurous woman and supported Kristina whenever classmates teased her. When Kristina came out in high school, both Jerry and Kathie became active members in PFLAG and supported her in creating a gay-straight alliance that would meet weekly at their house. For years, Kathie and Jerry marched with PFLAG in San Francisco’s Pride parade, even in the years that Kristina herself was out of town.

At the age of 59 Kathie decided that it was time to move on from full time teaching. While still loving her time with children, she was ready to leave behind the stress of constant lesson planning and extended work hours. When Kristina started teaching at Castro Elementary in Mountain View, Kathie, newly retired, offered her invaluable mentorship for her entire first three years. At that time, Kathie was also invited to join the board at Hidden Villa, bringing her experience as a classroom teacher to the organization. She would become very engaged with Hidden Villa for the next two decades as a board member, weekly education guide and hostel hostess.

With continued curiosity about the world, Kathie and Jerry met up with Kristina and her partner Patty on their year of travels while they were in Peru, trekking up to Machu Picchu and exploring the Amazon rainforest together. Several years later, when Jerry also retired, the two enjoyed extended travels together. With friends they visited Burma, India, Morocco and Patagonia to learn more about the culture, politics and history of these countries.

In 2008 Kathie was delighted to become Grammy to twins Niko and Oli. She welcomed their birth mother into the family as well, inviting Katita to stay with them before and after the birth and for family celebrations for years to come. As a Grammy she always had lots of engaging projects and outings available for the kids: harvesting carrots, pulling up monstrously big tomato plants at the end of the season, painting, drawing and of course looking for evidence of all sorts of animals while on hikes or camping trips. And with every visit, without fail, came the chance to snuggle up and read. Kathie and Jerry went to workshops about supporting adopted youth of color and extended their understanding of the Black experience in the United States. They also learned about sensory integration, occupational therapy, dyslexia, attachment theory and the world of homeschooling and decolonized education. Kathie was an engaged, loving and incredibly supportive grandparent and her grandchildren loved her immensely.

Kathie valued her relationships to family and friends perhaps above all else and prioritized spending time together and supporting those she loved. She visited family and helped organize gatherings and reunions. For years she met regularly with her book club, a woman’s meditation group, the Birdies – a group of fellow retired teachers from Juana Briones – and with her dear Peninsula Women’s Chorus friends, along with other close friends whom she loved.

Kathie’s love lives on in the hearts of all those she loved and who loved her, particularly her husband Jerry Underdal, daughter Kristina Mundera, daughter-in-law and grandchildren (Patty, Niko and Oli), brothers (Rob and Larry Langsdorf), nieces and nephews, (Ana, Andrew, Ashley, Brandy, Chris, Ella, Ryan, Shannon, Shaun and Stanley), great-nephews (James and Peter) and the many cousins, friends and colleagues who were so important to her throughout her life. She will continue to inspire us for years to come.

Photo Gallery
0 photos Upload a photo
Remembrances
0 entries Submit a remembrance
Memorial service
The family would like to invite all who knew Kathie to a day of stories, reflections and inspiration at Hidden Villa on March 1st. Please contact her daughter, Kristina Mundera, for details at KathieMemorial@gmail.com.
Make a donation
Donations can be made in her memory to Hidden Villa.
About this site     Contact us