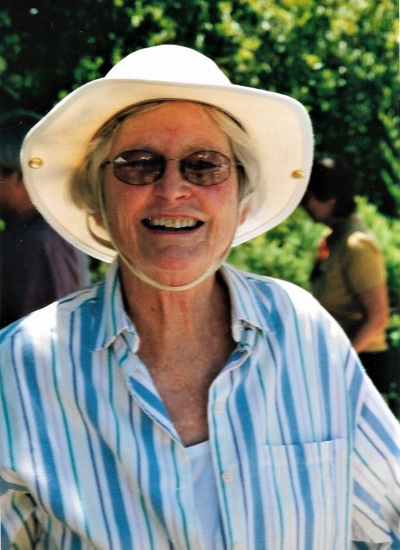 Louise Burpee Landreth, teacher, mother, philanthropist and community leader, passed away peacefully on Sunday evening, August 23, 2020. She was 95 years old. Born Louise Kellam Burpee on December 15, 1924 in Bronxville, New York, Louise lived a full and extremely active life. She referred to her hometown as “a small suburb with an excellent public-school system, where everybody knew each other.” The quality of that school system left a positive and lasting impression on her, and fed a lifelong zest for teaching and learning. Louise was very active in sports, and also played first trumpet in the high school band. She continued playing the trumpet for fun into her 80’s. After graduating from Smith College in 1946, Louise pursued an internship with the newly forming United Nations in San Francisco. In 1947 she was posted as a Documents Clerk in the UN’s Paris Office, which provided an opportunity to bicycle across war-torn Europe with several friends. By 1950 she was back in San Francisco, where she met Jim Landreth, who would become the love of her life. They married in Bronxville in January 1953, and settled into an apartment on Telegraph Hill to start a family. They moved to Atherton in 1955, and by 1961 had three sons and a baby girl. Louise served as President of the Palo Alto Junior League in 1963, then turned her energy towards earning her teaching credential. In 1968 she began a 23-year career as a Fourth-Grade teacher, starting at Trinity Parish School, and then Philips Brooks School in Menlo Park. After retiring in 1992, Jim and Louise moved to Inverness, California, where for decades they had enjoyed a summer property co-owned with relatives, the Munger family. There, she served as Treasurer of the Inverness Yacht Club, and President of the Inverness Garden Club Louise leaves a legacy of community engagement, activism for progressive causes, a long history of philanthropy, and the belief that “looking out for the other guy” was vital in daily life. She loved California history, and she could teach it. She loved jazz, especially swing, and she could play it. She deeply loved her family, and was just as deeply loved and respected in return. She is survived by her four children and their families; George and Liz (Kroha) Landreth of Ashland, Oregon, Gordon and Margie Landreth of San Rafael and their daughter Denise, Harold (Hobey) and Zoe (Sarantis) Landreth of Palo Alto and their daughter Eva, and Katherine Landreth of San Rafael. She is also survived by five nieces and nephews and their families from the Munger family, her sister in law Quoxy Burpee, and five nieces and nephews from the Burpee family of Rye, New York. A memorial will be scheduled once COVID restrictions have been lifted.