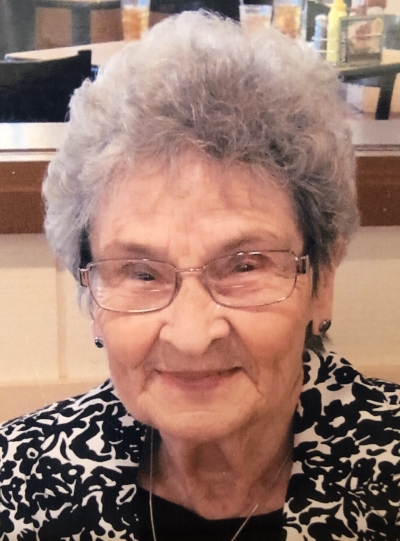 Louise Fleener passed away peacefully on July 3, 2020 after suffering multiple strokes. Named Theda Louise but always called Louise, she was the fifth of six children born to Claude and Maude (Ewoldsen) Smith. She grew up on the Smith family farm and graduated from Woodburn High School in 1941. Louise married Merrill Fleener in 1946; they were parents of two children, Gary and Tana. Merrill and Louise moved from Iowa to Oregon and then settled in San Jose, CA.

Louise had twinkly eyes, deep dimples, and a sweet nature. But she was highly competitive in sports and card games. A golfer and bowler in her younger years, she excelled at Wii bowling in her senior living complex. She played bridge, poker and cribbage as long as her eyesight allowed. And she was a champion pie baker. Louise was preceded in death by son Gary in 1967 (a student at Stanford University while studying abroad), and husband Mel in 2002. Survivors include daughter Tana (Bob) Budelli, 3 grandsons Bobby (Sierra), Mikie (Brooke), and Christopher (Naomi), 6 great grandchildren, brother and oldest friend Wilbert (Rosalie) Smith, and numerous nieces, nephews and family members.

Photo Gallery
0 photos Upload a photo
Remembrances
0 entries Submit a remembrance
Memorial service
Private
Make a donation
Family request that in lieu of flowers, donations can be made to one of the following: Cardiac Therapy Foundation of the Mid-Peninsula: 400 Middlefield Rd. Suite G-3 Palo Alto, CA 94303 Brain Aneurysm Foundation: 269 Hanover Street, Hanover, MA 02339 or visit the website www.bafound.org.
About this site     Contact us