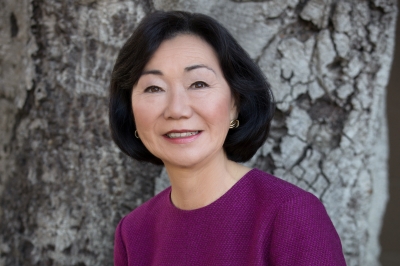 Elegant, kind, and generous, Margaret Ishiyama Raffin wrapped her arms around a universe of family, friends, and colleagues, enveloping all with love and support. She drew countless people into her sphere, where many regarded her as a confidante and kindred spirit. Her exceptional grace was inherited from her mother, Setsuko, and her clear-eyed approach to problem-solving came from her father, George. She was petite in stature but commanded an outsized influence: a keen and perceptive observer of human nature, she identified where there was need and set about filling it. She died at home, unexpectedly but peacefully, in her sleep.

Margaret, like her parents, was born in Southern California. George and Setsuko—who were incarcerated with other loyal Japanese Americans during World War II—modeled a philosophy of responding to adversity with dignity and perseverance, looking ahead and resolutely doing what was required. Their emphasis on education and civic responsibility provided guiding principles for Margaret’s life.

When she was five, Margaret moved to Palo Alto with her family. She graduated from Palo Alto High School and attended Scripps College in Claremont, California, before transferring to and graduating from Stanford University.

In 1969, Margaret married fellow Stanford student Tom Raffin. Soon after, when Tom was in medical school, Margaret became a medical social worker at Stanford Hospital. She held the same position at Brigham and Women’s Hospital while Tom completed his residency in Boston. There she met terrific colleagues and formed friendships that lasted more than a half-century. In both hospitals, she dealt with a challenging range of patients, beginning a lifelong commitment to mental health advocacy that motivated her to earn a masters degree in psychology and work as a therapist.

Tom and Margaret returned to Palo Alto, where their daughter, Elizabeth (“Lizzy”), was born. Lizzy was particularly close to her mother, who taught her the importance of knowing rules . . . and also when to break them. Together they had mischievous fun, cultivated and sustained a loving community of friends across generations, and moved through life with a shared set of instincts and values.

Margaret’s dedication to her family was unparalleled. Over the course of her life, she cared for her grandparents and then her parents and aunt with devotion and compassion. After they passed, she continued to honor their traditions and carried on their legacy of gathering family members, often around the dining table.

On weekends and holidays, Margaret set additional places—and sometimes whole tables—to host a village of friends and extended family. She created a second home for newcomers and welcomed back Lizzy’s childhood and college friends and, eventually, their children. She was an extraordinary cook and honed her skills taking lessons from then-unknown French chef Jacques Pépin. She treated those at home to recipes from class, such as her much-loved semolina with raspberries.

Some of Margaret’s closest relationships were with beloved members of the Yokouchi family on Maui. Spanning more than fifty years and four generations, her bond with the Yokouchis drew her to the island, where she was an integral part of the community. Margaret became a trustee of the Maui Arts and Cultural Center and was an ardent champion of its efforts to preserve and promote Hawaiian culture.

As president of the Ishiyama Foundation, Margaret collaborated with family members to support a broad range of causes, including education and the environment. On frequent trips to Japan, she maintained her family’s strong connection to their Japanese heritage, often visiting the Yonezawa Higashi Senior High School, which her paternal grandmother had attended. There she saw firsthand the impact of the family foundation’s philanthropy on students, programs, and facilities.

Another of Margaret’s special interests was nurturing young leaders, which she did by empowering visionaries to develop compelling programs. Nothing demonstrated her passion for advancing leadership capacity more than her longtime relationship with the African Leadership Group. She and Lizzy traveled to visit and celebrate the African Leadership Academy in Johannesburg, where she maintained lasting friendships with students and school administrators.

Margaret served on numerous boards, committees, and councils for Stanford. She was insightful, intuitive, and strategic—an expert and greatly appreciated convener. Most notably, in 2013 she helped establish the Stanford Medicine Community Council, dedicated to community outreach, and was appointed its chair. She spent countless hours in planning and strategy meetings and is credited with single-handedly building and cementing relationships within the thirty-member group—getting together with each person individually every year—to create a productive, cohesive unit. She led by example, volunteering at the annual Health Matters event, and worked to leverage resources across the university.

Margaret was also an active and valued member of the Stanford Hospital and Stanford Health Care boards of directors. In addition, she held positions supporting Stanford Athletics, the Haas Center for Public Service, and the School of Earth, Energy & Environmental Sciences. She had clarity that enabled her to be a quietly effective leader in pursuing these and all her endeavors. In 2016, Margaret received the Stanford Associates Governors’ Award in recognition of her long, exemplary service to the university.

Margaret lived with style and intention—and she had a lot of fun while at it. Those acquainted with the more professional Margaret delighted when her aura of reserve gave way to unselfconscious laughter at a good joke (often one she made herself). Among friends and family, her simple joys included berry picking, hiking, tennis, and working in and enjoying her lovely garden.

Summer horse pack trips in Montana’s Spanish Peaks took Margaret into pristine surroundings with cherished family and friends. She was confident in the saddle, comfortable in a tent, and perhaps happiest sitting around a campfire.

She spent time flyfishing in and around Yellowstone National Park, including the family’s home water on the Henry’s Fork near Island Park, Idaho. This connection led her to join the board of the National Parks Conservation Association to work enthusiastically on behalf of national parks throughout the United States.

Those who loved Margaret are forever changed—and improved—for having known her.

Private services have been held. A celebration of Margaret’s life will take place in the future.

For those who wish to honor Margaret with a donation, please consider making a contribution to the National Parks Conservation Association (www.npca.org) or LifeMoves (www.lifemoves.org).