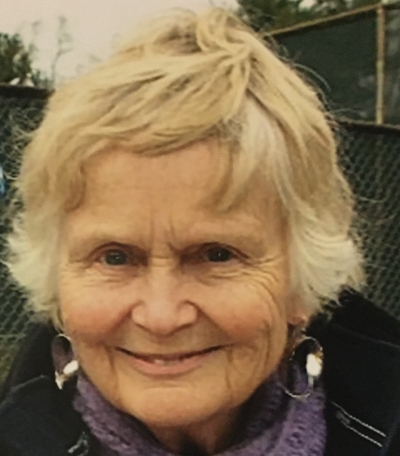 Mary Ann Hayward died on July 14 in Elkins, NH. She was a resident of Palo Alto from 1989-2018, moving here with her husband, Dr. Edward Harris (Ted) when he became Chairman of the Department of Medicine at Stanford. Their marriage ended in divorce.

During her years in Palo Alto she was a professional fundraiser. She worked as Associate Director of Youth and Family Assistance where she raised money for runaway and homeless teenagers, a job she called “endlessly rewarding.” With Rich Gordon, Executive Director of YFA, she initiated the first Starting Line Breakfast, an event that has become an important and popular annual fundraiser. Later she worked as Senior Associate at American Leadership Forum Silicon Valley, a premier program whose purpose is to promote community, philanthropy, and leadership in Silicon Valley. While managing the Senior Fellows program for graduates of ALFSV, she wrote the newsletter, led the annual fund drive and wrote major grants. She was also a member of ALFSV’s Class X and participated in the yearlong program as well as the one-week hike in the Sierras. Working at ALF and participation in the Class X year was “transformative,” she said, as she experienced the power of people working together.

While living in Palo Alto she volunteered in a number of organizations, first at Families in Transition, a program started by Judy Kennedy for immigrants and their families in East Palo Alto. She was a member of the board of Friends For Youth in Redwood City and in the mid-1990’s on the board of Trinity School in Menlo Park. She was active at All Saints’ Church in Palo Alto, initiating the Bell Tower Society for parishioners to remember All Saints’ in their wills.

She was a preserver of family and friends, of staying in close connection to people she cared about. She regularly wrote letters to those known and loved in communities from the East Coast to the West. The correspondence from letters received fills shoeboxes and cartons. She viewed these personal connections as an important undergirding of her life, a testament to the power of friendship and support. A lifelong advocate for women’s rights, Mary Ann sought out companionship and nurtured relationships with like-minded women, young and old.

Om 2018 she moved back to her native New Hampshire, where she had lived much of her life, to be closer to family. She leaves her sons and their wives, Ned Harris and Edie Meacham of Baltimore, Tom Harris and Kate Reavey of Sequim, WA, and Chandler Harris and Sarah Stearns of Thetford, VT. And grandchildren Andrew, Eliza, Maeve and Liam Harris. Her longtime partner, Lindley H. Miller, Jr., of Palo Alto, predeceased her.

The family will hold a private burial service in Hanover, NH, and a memorial service will take place in Palo Alto in 2021. In lieu of flowers, contributions may be made to All Saints’ Church Endowment, Waverley Street, Palo Alto, or Bridges Baltimore, Gilman School, 5407 Roland Ave., Baltimore, MD, 21210.