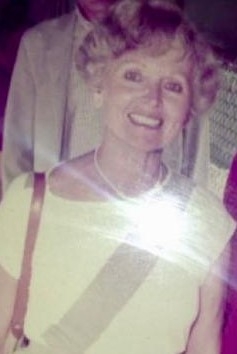 Mary Elizabeth (Betty) Schubert, beloved wife, mother, sister, and grandmother passed away at the age of 98 on September 17th, 2020 at Stanford Hospital in Palo Alto.

Betty was born in Clearwater, Kansas in 1922, daughter of Faye and Ray Broomfield. The family moved to Wichita where she started school, and then to Tulsa, Oklahoma, where she was crowned Carnival Queen in her senior year. Vivacious and beautiful, Betty loved to dance, and frequently attended USO dances with her three sisters.

The family moved to Pasadena where Betty attended Pasadena City College. Later, while working at the Naval Bureau of Aeronautics in Pasadena, Betty met Bill Schubert, a young Naval officer who was in town from Annapolis to visit her boss. It was an immediate attraction, and he asked for her phone number. They started dating, visiting nightspots in the area, including the Hollywood Palladium, and the beaches at Malibu, Santa Monica, and Coronado that they both loved. When Bill returned to Annapolis, they continued their relationship through letters, phone calls, and visits. After only 6 months, they were married in Pasadena on February 24, 1946.

Bill and Betty lived in various locations across the United States including Pensacola, Florida and Corpus Christi, Texas, where Bill trained as a pilot, and Boston where Bill attended business school. They spent most of those early years in Northern Virginia outside Washington D.C. where Bill worked in the NASA space program. Betty enjoyed Navy life, especially the parties! At NASA events, she was excited to meet and get to know some of the iconic figures in the early space program. While living on the East Coast, Betty and Bill had three children – Stephanie, William, and Deborah.

Betty built a home and cared for the kids while Bill pursued a demanding career. She delighted her young kids by devising fun, original stories for bedtime. Through numerous moves and school changes, she was always there to listen and offer an optimistic vision of the future. The family moved to Palo Alto in 1964 when Bill retired from the Navy and began a second career at Stanford Research Institute.

Betty loved living in Palo Alto and became interested in fashion. She attended the John Robert Powers modeling school and earned an AA in Fashion Merchandising at Foothill College. Over time, she started doing fundraising for the Children’s Health Council (CHC) Auxiliary in Palo Alto where she served as President for two years. Following her love of fashion, she produced several fashion shows with well-known designers to benefit CHC. Energetic and determined, she managed to persuade Edith Head, famous movie costume designer, and fashion designers Mary McFadden and Tommy Bahama, among others, to stage successful shows in Palo Alto. Betty will be remembered for those great fashion shows! Betty also served on the CHC Board of Directors.

After Bill retired from SRI, Betty and Bill engaged in a variety of fun activities--always together--including travel to the Caribbean, Rio de Janeiro, Hawaii, and Europe; producing videos for the local community TV station; sailing their boat on the SF Bay; and attending CHC events. Bill played piano in a big band and in his jazz trio, SofJazz, and Betty would go to his gigs to support him. Later, she took voice lessons and joined the band as a vocalist. Bill and Betty loved doing this activity together over the years.

During these years, Bill and Betty built a strong bond with their granddaughter, Emilie, as they helped their daughter, Stephanie, with caregiving. They took Emilie on long walks in the neighborhood, brought her along on shopping trips, and always offered a stable, calming place in her life. Over the years, Stephanie and Emilie always knew they could find comfort during stressful moments by taking the short drive to Palo Alto to be with Gammy and Gampy.

Betty is preceded in death by her husband, Bill, her parents Faye and Ray Broomfield, and two sisters, Ellen and Martha. She is survived by her three children, Stephanie, Bill, and Deborah; grandchild Emilie; and sister Joan Broomfield of Poplar, Montana. Betty continued living in her Palo Alto home until her death where her son, Bill, cared for her. The family would like to thank her caregivers, Mary and Maryanne, for their loving support during Betty’s last years. A private family service was held on September 30 at Gate of Heaven Catholic Cemetery in Los Altos Hills where Betty was buried next to her beloved husband, Bill.

Photo Gallery
0 photos Upload a photo
Remembrances
0 entries Submit a remembrance
Memorial service
Betty has been laid to rest next to her beloved husband, Bill Schubert, at Gate of Heaven Catholic Cemetery in Los Altos, CA.
About this site     Contact us