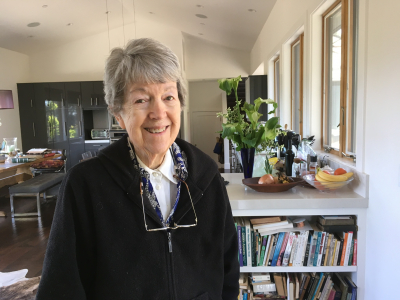 Patricia Day Weiss, a longtime resident of Palo Alto, died peacefully on Tuesday September 21. She was born on December 4, 1924, to James Francis Day and Mary Prince Harris. After high school Patricia worked as a reporter/photographer on the Bakersfield Californian newspaper. She then attended UC Berkeley. During this period she met and married Louis Weiss. To complete his degree Louis applied to and was accepted at the Central School of Speech and Drama in London. The couple lived for nearly three years in London where Patricia was employed at the third air force headquarters at South Ruislip. After returning to the U.S. she was employed by Stanford University, from which she was retired as Assistant Dean of Graduate Studies. A lifelong plein air watercolorist, Patricia felt fortunate in living in an area of such varied geography and temperate climate. She was a charter member of the Tuesday Artists (formerly Peninsula Watercolor Group). She was predeceased by Louis, her husband of 54 years. Survivors include 3 children: Caroline (Richard), Daniel (Meredith), Jennifer (David), and three grandchildren: Simon (Brooke), Andrew (Mariel), Natalie, and four great-grandchildren: Vivienne, Jasper, August and Sebastian.

Photo Gallery
0 photos Upload a photo
Remembrances
0 entries Submit a remembrance
Memorial service
Services may be held at a later date.
Make a donation
In her life Patricia rescued and cared for many dogs. Memorial donations may be made to Pets in Need. Link: HTTPS://www.Petsinneed.org
About this site     Contact us