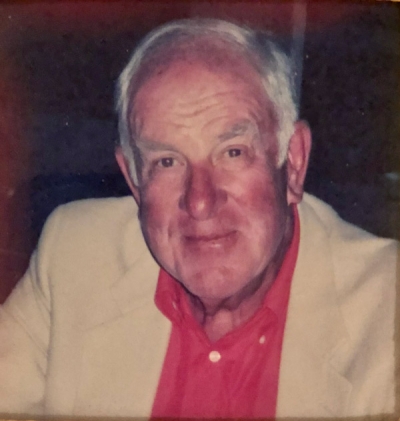 Patrick Goodenough, husband, brother, father, grandfather, great grandfather, friend, mentor, golf partner, artist, sailor, teacher and incredibly giving citizen passed away peacefully on Christmas day with his best friend and wife Pam by his side. Patrick lived a full life and at 90 had traveled most of the world, including sailing across the Pacific. He had a successful business career and a very active retirement that was focused on helping and inspiring others.

Born in England in 1930, Patrick immigrated with his family to Canada in 1938 just prior to the outbreak of the war in Europe. His Father enlisted in the Canadian Air Force shortly after their arrival in Canada which required another move to Ottawa, there Patrick attended Ashby College. In 1943 the family moved to Vancouver Island and Patrick attended the Shawnigan Lake boarding school where he graduated two years early at the age 15. Following a year working in a foundry and later a sash and door factory, he attended McGill University in Montreal, receiving a bachelors degree in 1951. After McGill, He joined the United States Air Force during the Korean conflict, assigned to a unit that studied how to best utilize the skills of the recruits. This training steered him towards his career in Human Resources. His first job was as personnel manager at Sylvania Electric in Mountain View. Later he started his own business, Patrick Goodenough Services, which served corporations and individuals in insurance, estate planning and executive benefit programs, he retired in 1995.

Upon retirement Patrick dedicated himself to the service of others. This manifested in his spending 25 years working with The Boys and Girls Club of the Peninsula in various capacities as a volunteer: art teacher, mentor, tutor, board member and friend. When he wasn’t spending time volunteering he honed his skills as a painter and could be found sailing his boat Trinity on the bay.

When Patrick celebrated his 90th birthday his favorite gift came from Andreas a former mentee. Andreas now a chef and a BGCP employee served 900 teens dinner in Patrick’s honor.

In Patrick’s honor, perform unexpected and unsolicited acts of kindness.

Photo Gallery
0 photos Upload a photo
Remembrances
0 entries Submit a remembrance
Make a donation
https://www.bgcp.org/donate
About this site     Contact us