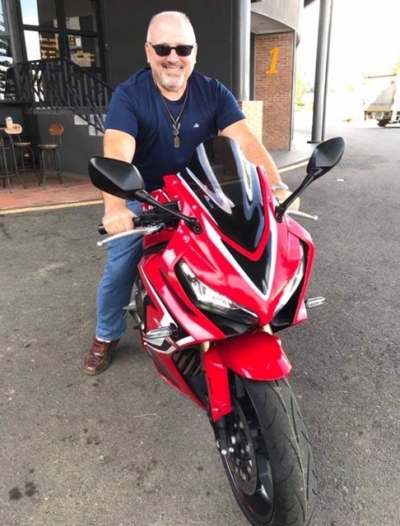 Phillip Harvey Nissley left his earthly body behind on September 15, 2020 but his soul and spirit will be with us forever. A forty-year resident of Los Altos Hills and Mountain View, California, he was at his home in Thailand with his wife, Wijittra,”Vi”, when he passed away suddenly of complications from a new treatment he’d been receiving for ulcerative colitis. He was 59 years young.

Phil was born in Cleveland, Ohio on March 28, 1961 to Juanita (née Reeder) and Harold Thomas Nissley, the second of five children. In 1969 they moved to Toronto, Canada where Phil became a leader on both the football -- a star fullback -- and wrestling – at 148 pounds! - teams at his high school, Richview Collegiate Institute. The younger Phil loved Mad Magazine and favored Shemp out of all of The Three Stooges. The mature Phil graduated to Monty Python, George Carlin, SNL, Star Trek, and The Twilight Zone. He played the violin, he played street and pond hockey (depending on the season), he played a lot of vinyl on his turntable, classic and progressive rock, and he never missed a Friday or Saturday night of public skating at Humber Valley rink.

In 1978 they moved again -- Phil preceding the rest of the family in the “old” blue van -- to Los Altos Hills, California. He often recounted that trip, swimming in Lake Tahoe and body surfing in the Pacific for the first time. He graduated from Gunn High School in 1979 and joined Hewlett Packard for two years. An Astronomy course led him back to school at Foothill College where he returned to his love of football and played for the Owls. He was recruited by the football program at Lewis and Clark College in Portland where he was a starting offensive lineman for the Pioneers and graduated with a BSc in English and Computer Science in 1989.

Phil began a long and very successful career as a technical writer at Apptera, Tibco, Clarify, Maxtor, and many other software companies. He then worked at PayPal designing and writing e-learning and instructor-led courses. He completed a Graduate Certificate in TESL from UC Santa Cruz Extension and was close to finishing an MS in Instructional Design/Instructional Technology from SFSU. His research there was integral to his last job at Symantec where he designed and developed customer-facing, computer based training.

Hanging with close friends at the beach, playing Frisbee-golf, enjoying great barbeque and dark, stout beer, or camping at Laguna Seca Raceway (a 10-year regular at Turn 4 in the ubiquitous blue van) were his favorite pastimes. He loved motorcycles and racing of any type. He toured the Swiss and Italian Alps on a BMW and owned many motorcycles of his own: a Kawasaki H1-500 Triple, a couple of BMW’s, a gorgeous Harley Davidson that he rode through California, Wyoming, Montana and all of the Western US, and, in Thailand, a brand-new Honda CBR-650R.

He was a purist, almost an aesthete, searching out the very best espresso, making Scottish shortbread by hand with only three ingredients the way his Glaswegian grandmother taught him, engineering the installation of solid copper pipes or a tank-less water heater better than the plumber, sourcing the perfect glass-plated Italian medicine cabinet, switching to fancy shaving accoutrements long before the hipsters came along.

Phil would have been a superbly competitive Jeopardy contestant. He was a voracious reader, fond of Mark Twain, Wallace Stegner, Carl Sagan, Hunter S. Thompson, J.R.R. Tolkien, and the beat poets. He studied the arcane but connected depths of human history and could explain the origins of port wine or the comparative linguistic patterns of several families of languages or the current political situation in an obscure, distant land and its effects on the rest of the world. He subscribed to several scientific journals with particular emphases on electronics and medicine. Perhaps music was his greatest passion: high-quality audio gear and the deeply spiritual music of Pink Floyd, David Gilmour, early Genesis, King Crimson, Frank Zappa, Joy Division, and Dead Can Dance.

Most important of all was the trip he took to Thailand in 2005 where he fell in love with Vi. After a year of long, long distance dating, they had a Buddhist wedding in Thailand in 2006 and Phil brought her back to California where they got married in 2007. They restored their fantastic Mackay house in Mountain View and turned the back yard into a beautiful fruit and vegetable garden. Phil introduced Vi to snow in the Sierras and turned her into a rabid 49er fan. They entertained friends and family and built a wonderful life together.

Phil grew to deeply appreciate the simpler, unhurried life in Vi’s home province of Buriram. In 2017, at the age of 55, he fulfilled his dream of an early retirement based in Thailand. Phil and Vi remodeled their new home in the town of Buriram and began developing Vi’s land in the country with the goal of building a small house and self-sustaining farm. Phil bicycled every day, volunteered teaching English, and, with Vi, began travelling throughout Thailand, Southeast Asia, and internationally. They had an amazing three-week adventure in Italy last year and were planning to be in Scotland for Phil’s 60th birthday in March of 2021. Phil did not suffer fools gladly. In fact, he did not suffer fools at all. He was a man of great humor and few words unless he had something to say in which case, people listened. And while he had no tolerance for buffoonery he was patient and generous with sincerity and honesty. He was blessed with a wide circle of amazing friends who adored him and who are heart-broken at his passing.

He was pre-deceased by his parents in 2017 and 2019 and by his infant brother, Jonathan, in 1963. He is survived by his sisters Pamela (Ed Daranciang) and Phyllis O’Sullivan; his brother Paul (Alejandra); his nephew John Patrick O’Sullivan III; his niece Sasha Jean Nissley; his aunt Alice Jean Falconer (née Nissley) and many cousins; his large and loving extended family of in-laws in Thailand; and Vi, his beloved wife of fourteen years.

Phil was cremated in a traditional Thai Buddhist ceremony on September 20, 2020. On that same date, his family in California mourned his passing with a private gathering at his parents’ grave site in Palo Alto complete with bagpiper. When it is safe to travel and be together again Vi will join us in California for a magnificent party for all of his friends and loved ones. Meanwhile, if you care to honor his memory, his family suggests a donation to the Crohn’s and Colitis Foundation or the charity of your choice. We love you dearly Phil. You will always be in our hearts.