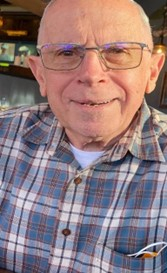 In June, Richard (“Dick”) Humphries, 86, passed away peacefully at his home in Los Altos. He was surrounded by family and friends whose lives he graciously touched with his warmth and wisdom.

He had been a physicist and electrical engineer, before becoming a Certified Financial Planner.

He was a longtime resident of Palo Alto. He loved astrophysics and geology. He traveled throughout the U.S. and the world with his late wife, Sue Humphries until her passing.

He continued his travels with his second wife Veronica. He had an insatiable curiosity about the world, had a full, hearty laugh and a serious sweet tooth.

He leaves behind his wife Veronica and her family, son Daniel, and his most beloved daughter Gwyneth Anne and son-in-law David.

He will be greatly missed and forever held in the hearts of all who knew him.

To share your memories of Dick, please go to: https://www.spanglermortuary.com/obituary/richard-humphries