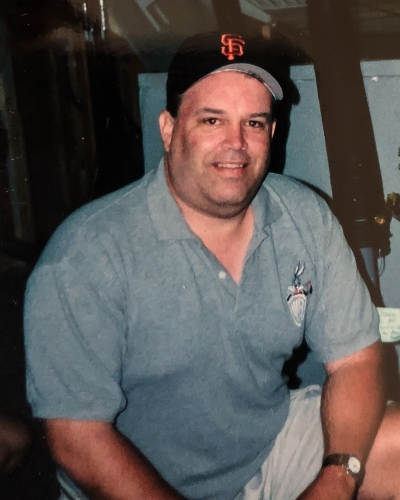 In Redwood City, surrounded by his loving mother, Carolyn Hartman, and his dog, Jersey. Son of Del Wayne Chandler and beloved big brother to Don Chandler and Kathleen Hartman-Felion and Uncle to Emily Chandler.

Rick is a longtime friend and coach to Peninsula youth for generations, changing their lives for the better with his calm demeanor and wise guidance.

Rick’s writing career began at Sequoia High School with the Sequoia Times and continued in print with the Redwood City Tribune, Peninsula Times Tribune, Palo Alto Weekly, San Mateo Times, San Francisco Chronicle, and Tahoe Tribune. As a pioneer in electronic media, he was considered one of the original “blogfathers” and is a co-founder of groundbreaking sports site, Deadspin. He worked for MSNBC, Ironminds, and created the blog Peninsula Youth Sports. He coached basketball and baseball at Serra High School, taking his basketball team to the State Championship. As the basketball coach for South Lake Tahoe High School, he took his players to their first Junior Varsity win in 20 years. In his early coaching career he had several years at Mt. Carmel in Redwood City.

He coached Super Bowl champion Tom Brady at Serra High School and professional basketball player, Jeremy Lin, when Jeremy was first introduced to the game at June Lathrop Stanford Middle School in Palo Alto. Rick will be remembered with love by all those who knew him.

All are invited to celebrate his life on August 31st at the Red Morton Community Recreation Center at 1120 Roosevelt Ave in Redwood City. Service begins at 11:00am with a luncheon reception to immediately follow.

Photo Gallery
0 photos Upload a photo
Remembrances
0 entries Submit a remembrance
Memorial service
All are invited to celebrate his life on August 31st at the Red Morton Community Recreation Center at 1120 Roosevelt Ave in Redwood City. Service begins at 11:00am with a luncheon reception to immediately follow.
About this site     Contact us